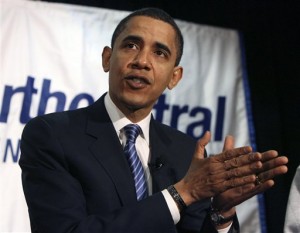 ** ADDS INFORMATION ABOUT WRISTBAND ON RIGHT ARM ** Democratic presidential hopeful Sen. Barack Obama, D-Ill., makes remarks during a community meeting Saturday, Feb. 16, 2008, in Wausau, Wis. Obama is wearing a wristband in memory of a soldier killed in Iraq, given to him by a mother who said she wants the Democratic presidential candidate to keep others from dying. Tracy Jopek of Merrill, Wis., gave Obama the bracelet at a rally Friday night in Green Bay, and Obama was still wearing it Saturday as he campaigned across the state before Tuesday’s primary. (AP Photo/Rick Bowmer)