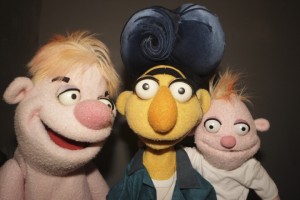 This undated image released by the Israel Electric Corporation shows Sheka and Teka and a baby puppet used in its latest public service campaign. Sheka and Teka, or socket and plug, have starred in the companys ads for more than a decade. While Israelis have long playfully questioned whether the characters might be gay, the arrival of a baby puppet in the new campaign has set off new speculation about their sexual orientation, with some groups accusing the company of being intentionally ambiguous in a cynical ploy for publicity. (AP Photo/Yossi Weiss, Israel Electric Corporation, HOPD)