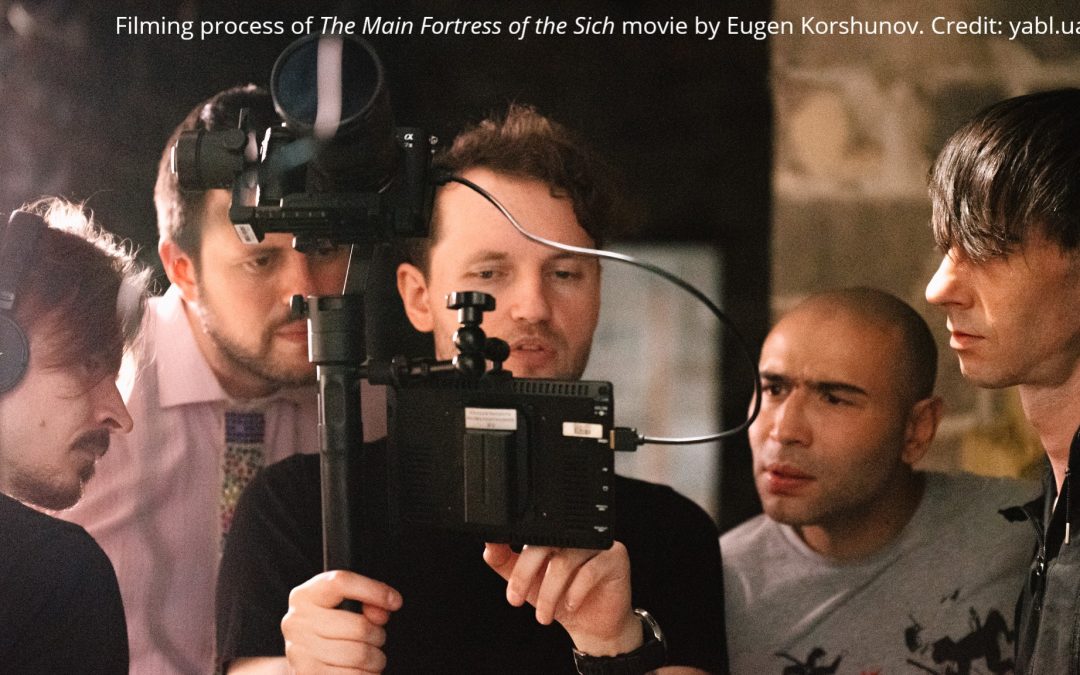 “Changes won’t be fast, but they are happening.” Photographer and activist Nikita Karimov is an optimist. A lot has already been achieved for the visibility of the LGBTQ community in Ukraine over the last years. More and more people refuse to hide who they are, especially since the first Kyiv Pride in 2013. Not only activists, but also artists and creatives work on LGBTQ topics. They help to create a sense of identity and community and also try to address a more general public for more visibility. The public awareness of homosexuality and gender identity is still low, stereotypical perceptions, conservative attitudes and homo- and transphobia are still going strong. Attacks and threats from right-wing groups have increased over the last two years and the fear of a backlash is omnipresent. But “there is no way back, we are too many,” says Karimov.

Role models for those who don’t fit in

When Karimov planned his first exhibition with portraits and coming-out-interviews of trans people in 2014, it was not easy to find participants who were ready to open up. Some of them didn’t want to show their faces. But now the situation is completely different.

“The community feels safer to show itself, despite the threats.”

Many people wanted to take part in Karimov’s current multimedia project Genderprism. It combines photographs with text and music and tells the stories of young trans and queer people, their relationship with family, partners and themselves. Karimov wants to reach those who won’t easily find role models because they don’t fit into the common picture of transgender people. For those struggling with their own identity, it is important to make queer and non-binary identities visible.

“I now see identity as a spectrum. Every person has too many shades and nuances to be defined in several names. You can’t possibly know what the person is like,” says Margo, one of the participants. 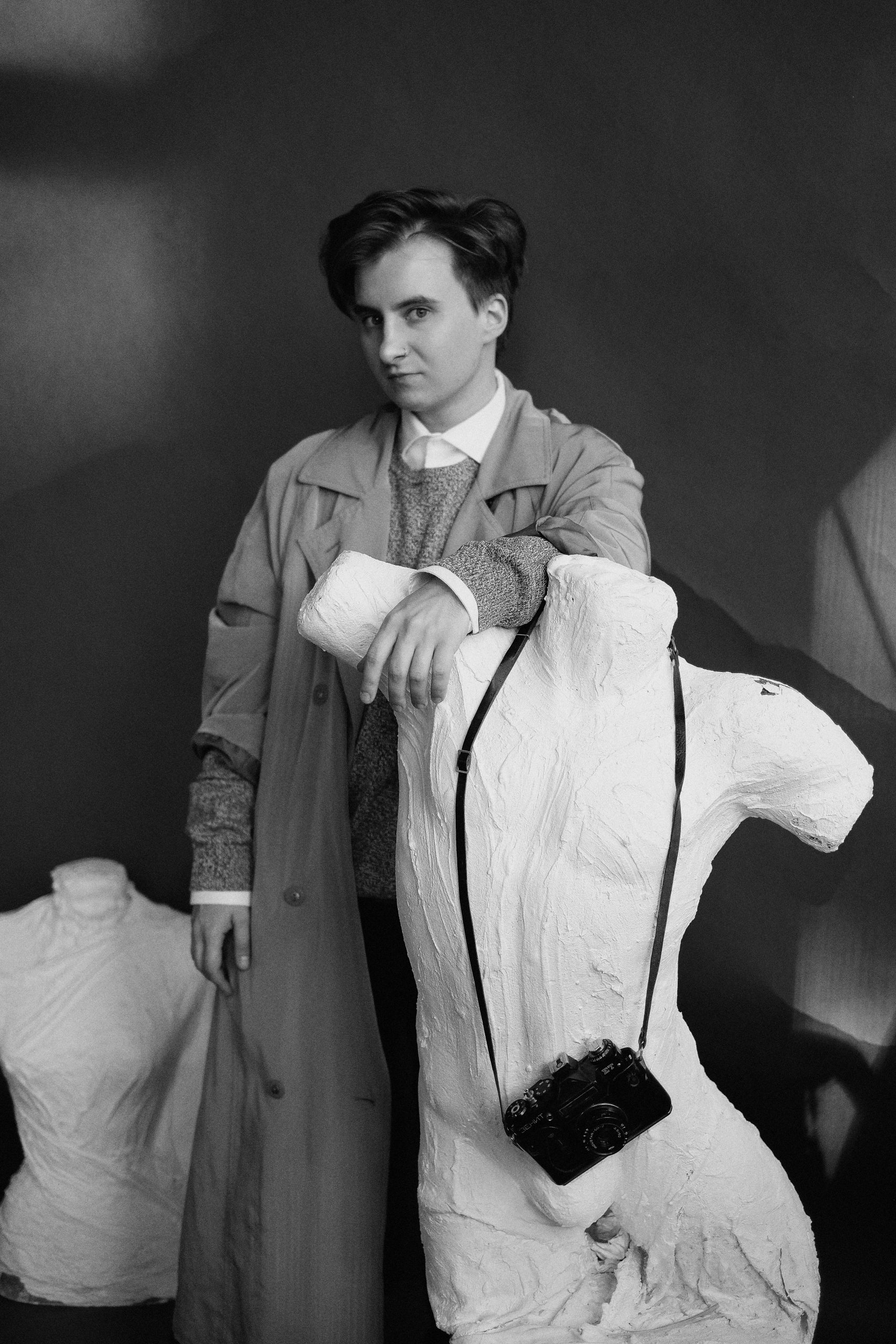 In Ukrainian mainstream media and culture LGBTQ are practically invisible. Sometimes there might be a gay minor character in a popular book, but only rarely. If the focus of a book is on LGBTQ topics, it is rather marginalized and only visible within the community, says writer Vadim Yakovlev. Yakovlev’s first book Where the Territory Begins was published recently. A trans woman is among the main characters of the novel, but the focus is not on gender identity. It is a mix of thriller, adventure story, utopia and dystopia. Referring to the war in Donbass, it asks the question whether the territory is more important or the people within the territory. The crisis of democracy and rise of nationalism and the ultra-right in Ukraine as well as in the Western world are also covered in the book. Most reactions to the novel came from within the LGBTQ community, but also from people who are just generally interested in literature. Yakovlev hasn’t been attacked by right-wing groups:

“I’m lucky. They are more focused on activists, war and politics.”

There are no repressive laws like in Russia, where the law against so-called “homo propaganda” makes it almost impossible to publicly show or address homosexuality. But the widespread homophobia in Ukraine still makes it hard for LGBTQ topics to find their way out of the community into the wider public. LGBTQ-friendly exhibitions and art projects have difficulties to get funding, explain the curators Natasha Tzeliuba and Anna Ten.

“If our exhibitions were about traditional Ukrainian embroidery, sponsors would queue.” Self-censorship is also a problem, sometimes cooperation partners withdraw because they fear attacks or bad publicity. On television and other mainstream media, there are still many stereotypes visible, adds art critic Oksana Semenik. “For example: ‘If you’re gay, you’re very feminine.’ People still think that this is how it works.”

The LGBTQ movement in Ukraine was started by gay men, other identities are still less visible. That is one of the reasons why Kateryna Semchuk started the lesbian zine Lezo. There is not much of a lesbian community right now and, compared to gay men, lesbians have less space, in which they can express themselves, she says. While most communication and self-expression happen online, Lezo is a medium that lasts longer than posts in a newsfeed. Having started in 2018, Semchuk is already working on the fourth and fifth issues of the zine. About 500 copies per issue are printed and distributed in various cities.

Everyone who identifies herself as lesbian or bisexual woman is invited to participate and send their articles, poems, illustrations, photos or other content. Each issue has a different topic, the first was about identity and the second about body (covering various themes from body image and body hair up to abuse). The third Lezo zine is about lesbophobia. The general term homophobia conceals the specific stereotypes and forms of discrimination lesbians are confronted with.

“Mostly, lesbians are not taken seriously. People will say: ‘Just wait, you’ll find a man,’” says Semchuk. If they are not ignored, they are fetishized by heterosexual men.

As LGBTQ topics are not represented in high gloss magazines, but in small, self-made publications like Lezo, queer art is also not present in the National Gallery, but in independent galleries and art centers.

The contemporary art scene is tolerant, “LGBTQ people feel they can be themselves in this community,” says Oksana Semenik. This is especially true for the rave scene: “With this music you can feel free, nobody looks at how you are dancing, nobody cares who you are.”

While there are no galleries or other creative places specially dedicated to queer art or music, there are many places that feature exhibitions and other events with LGBTQ artists. One example is IZOLYATSIA. The cultural platform was located in an old insulation factory in Donetsk. In 2014 the area was seized by the self-proclaimed “Donetsk People’s Republic”, and IZOLYATSIA had to move to Kyiv. In the context of their project Coming out of isolation several resident artists worked on LGBTQ topics.

Carrying on despite threats

The Equality Festival in Kyiv, which brings together artists and activists who fight any form of discrimination, offers lectures, exhibitions, performances, workshops, concerts and parties. Due to right-wing threats and the pandemic, the festival hasn’t taken place for the last two years. A regional version of the festival in Lviv was attacked and had to be evacuated. There have been a number of attacks against exhibitions and film screenings with LGBTQ topics in recent years. Participants were beaten up and part of a cinema burnt down. A common method are anonymous bomb threats that will stop the events from happening.

Cultural events in Ukraine that are labelled LGBTQ friendly have to be planned months in advance, and organizers have to develop a strong security concept. But for most, this is not a reason to stop and go back into hiding. Eugen Korshunov, who has been verbally and physically attacked for his art, is one of them.

He says: “Many iconic artists are beginning to work more actively with queer themes. There are more and more galleries, clubs and LGBT-friendly festivals.” His colleague Yana Bachynska adds: “Something which saves the situation is that exhibitions associated with LGBTQ topics are as invisible for the absolute majority of the population as any other exhibition of contemporary art.”

While contemporary art often stays below the radar, it can sometimes still attract the attention of the general public and can influence how society views LGBTQ topics. One example is the exhibition We were here by artist Anton Shebetko in 2018. It showed pictures of LGBTQ soldiers and helped to destroy the right-wing myth that homosexual or transgender people are not defending the country. The exhibition was also the starting point for the self-organization of LGBTQ soldiers in a supportive network. Shebetko managed to show that LGBTQ people are present in every area of society.

Art can challenge public perceptions and create new images. With his film The Main Fortress of the Sich, Korshunov created his own take on “the great Ukrainian myth about the Cossacks”, which plays an important role for national identity. The experimental film shows gay Cossacks and emphasizes that the historic and cu

ltural heritage of Ukraine belongs to everyone, no matter which gender or sexual orientation. 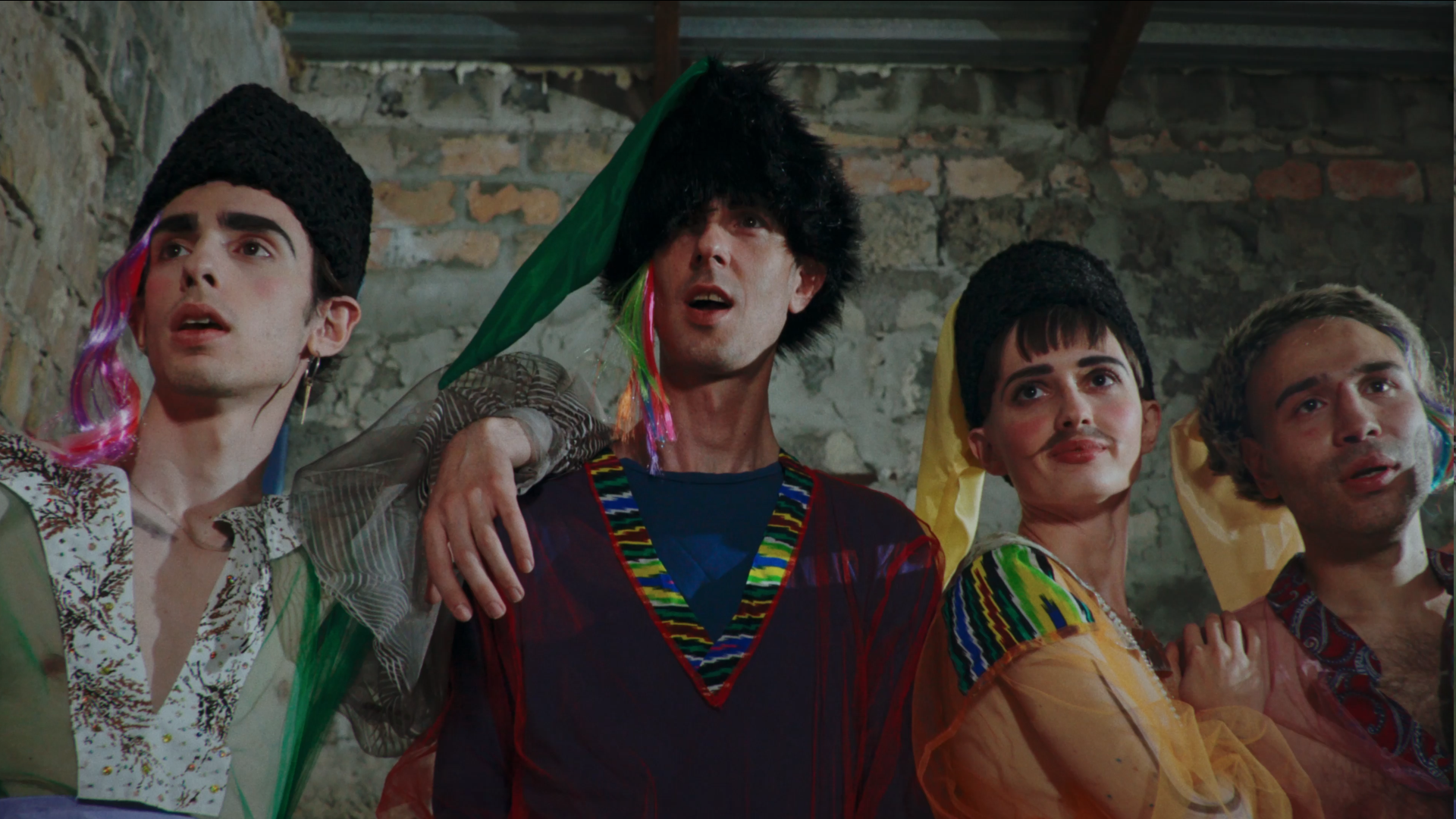 Capture from The Main Fortress of the Sich movie by Eugen Korshunov. Nikita Karimov. Credit: Private

“These two mediums allow me to be more visible to people who are far from the art world.”

His art is very political and deals with gender identity as well as national identity and hypocrisy within the Ukrainian society. While some of Bachynska’s films deal with history and present, Tovarystvo Sekta is about a utopian future, a “new normality”, in which being queer is no longer declared abnormal by society. The film shows steps towards a “genderless and classless world” where the question of sexual orientation and gender identity is not important anymore. It combines science fiction motifs (for example children are born from incubator biocyborgs) with images of how people live together freely, sharing art, thoughts and love. 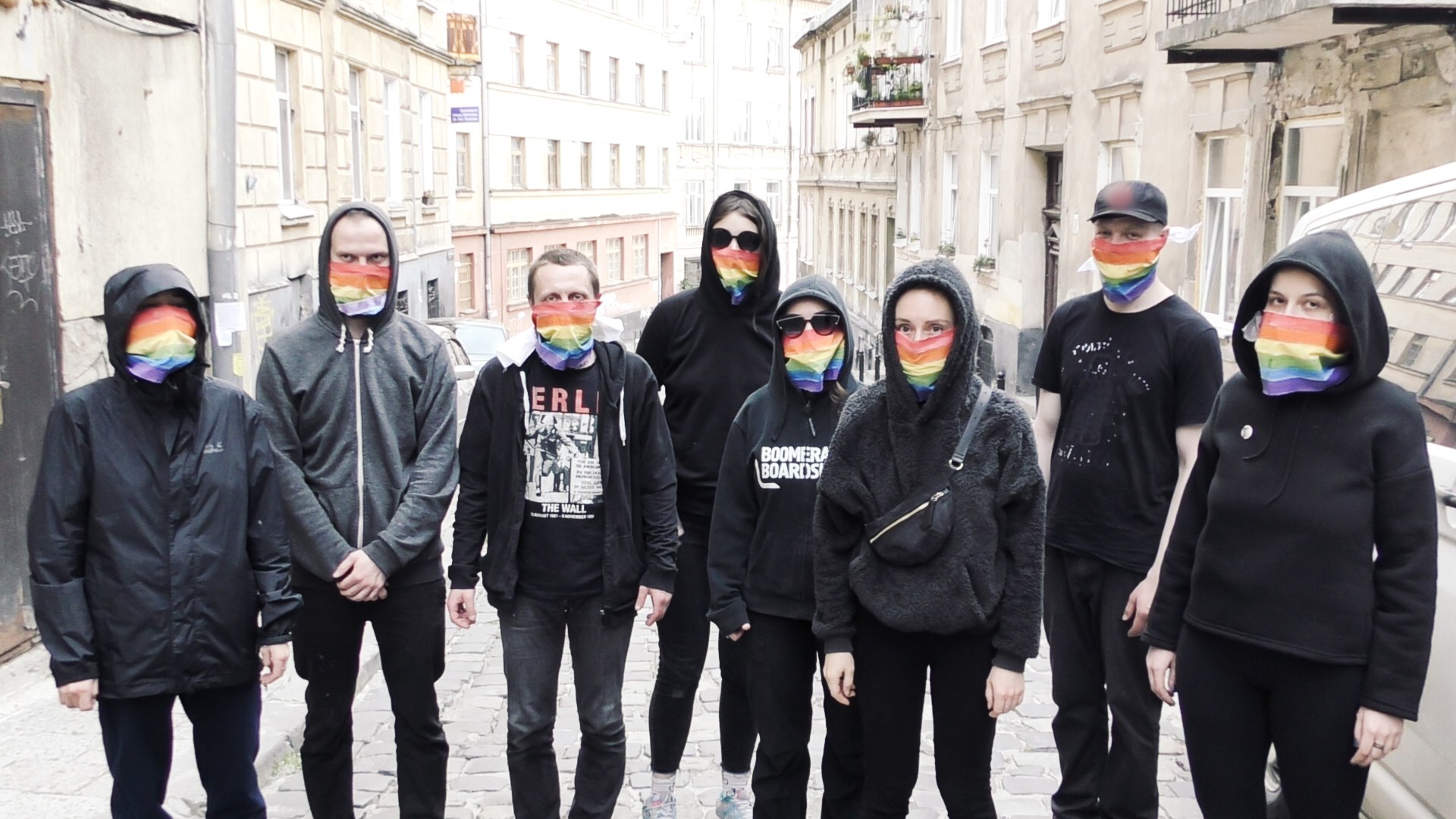 But “Tovarystvo Sekta” fortunately doesn’t want to be an agreeable hippie tale, it also shows disturbing and violent images and challenges standard perceptions of religion, politics, art and more. Many scenes show artistic interventions in public space, for example a group of people dressed in black with rainbow colored face masks pose on the street with the slogan: “LGBTQ is a basis of Lviv City”. And this is not a utopia, but simply the truth: LGBTQ people are an important part of society, in Lviv, the rest of Ukraine and everywhere else. No matter if society wants to see them or not. 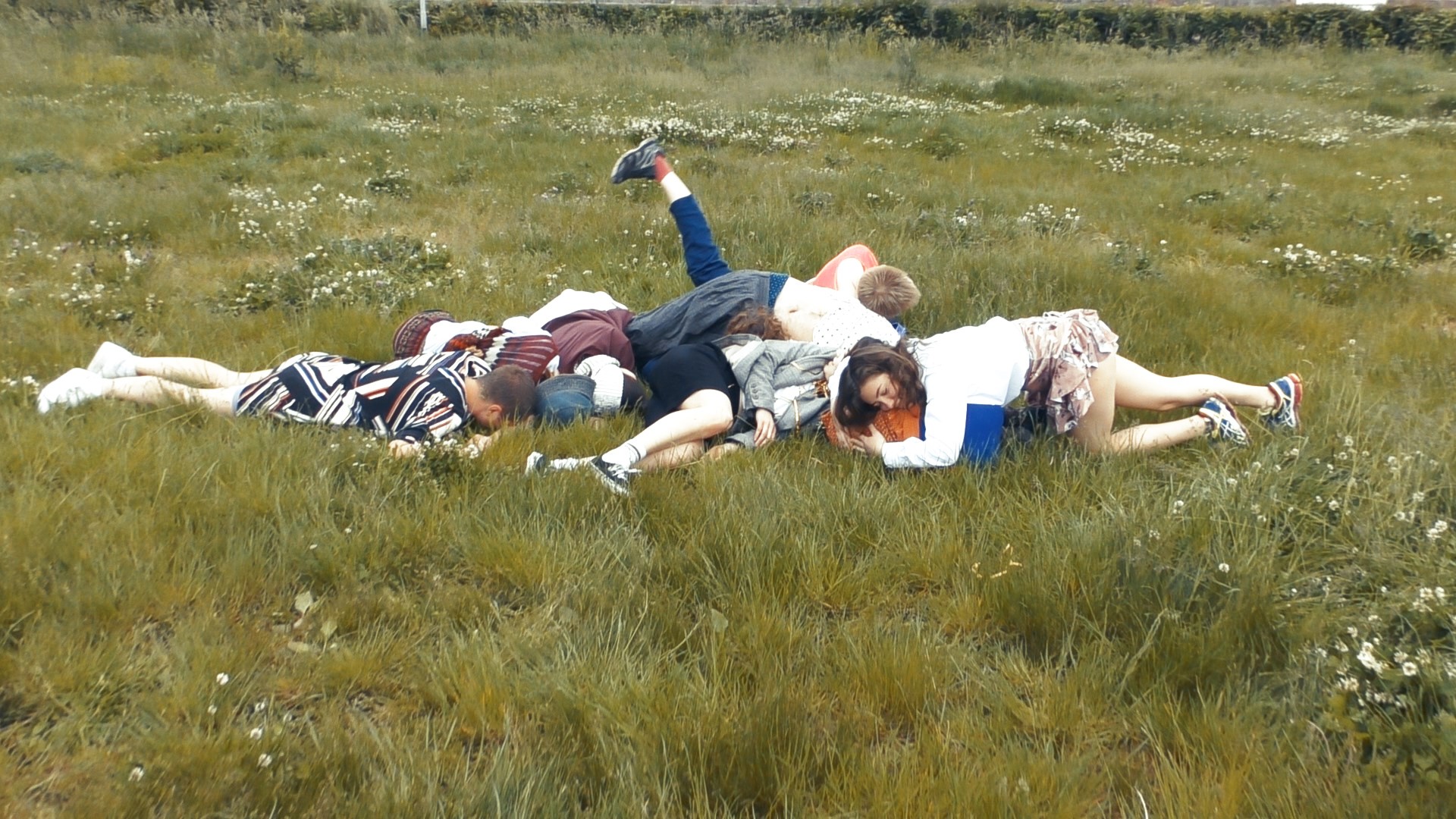 Artists play an important role in ensuring that LGBTQ people are more and more seen. Their approaches are different, some, like Nikita Karimov, are working more on documentaries and let people share their stories. Some help with LGBTQ representation by introducing queer characters, like Vadim Yakovlev. Others, like Eugen Korshunov and Yana Bachynska, create sophisticated works of art that challenge and provoke the audience.

“People think it’s something big, sexual and very provocative, like wearing fancy clothes, parties, drugs. But it’s not. It’s about people who are invisible in society, about people who want equal rights.” Sadly, it is already seen as a provocation by many, when people want to be who they are.

But the best and most interesting art has always something provocative about it, no matter what its topic is. Only then it is visible and only then it can have an impact on society. Art can change what is perceived as a provocation and what as normal. It may take some time, but the beginning has been made.

Journalist and editor from Frankfurt; she focuses on (counter-)culture, political art in the post-Soviet countries