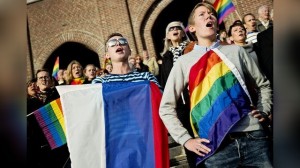 A crowd of people sing the Russian National Anthem at the Stockholm Olympic Stadium on October 6, 2013 while raising rainbow flags in solidarity with the Russian LGBT community. A project called ‘Live and Let Love’ will use footage from the event to be cut together with other singers and musicians from around the world to make a video film that will be shown on YouTube ahead of the winter Olympic games in Sochi. AFP PHOTO / TT NEWS AGENCY / ERIK MARTENSSON +++ SWEDEN OUT +++