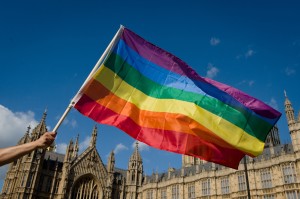 A protestor holds a rainbow flag outside the Houses of Parliament in central London on June 3, 2013, as protestors gather in support of same-sex marriage. A “wrecking amendment” aimed at derailing the government’s same-sex marriage bill, which was passed in the Commons despite the opposition of 133 Tory MPs, is being debated in the House of Lords. AFP PHOTO/Leon Neal (Photo credit should read LEON NEAL/AFP/Getty Images)