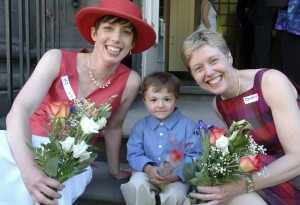 9. May 20, 2004. Couples who applied for marriage licenses on May 17 and did not have the standard three-day waiting period waived, picked up their licenses on May 20. In honor of the historic occasion, marriages were held all day long at the Arlington Street Church, a Unitarian Universalist landmark in downtown Boston. Every 20 minutes, a new couple, sometimes alone, other times with children and even pets, walked down the aisle to say their vows. Among the families celebrating were M. J. Knoll, Christine Finn, and their four-year-old son, Henry. After the wedding, Henry concluded on his own, “Now we’re all Knoll-Finns.