Hate crimes against LGBT people in Ukraine: “The attacks have become more and more organized” 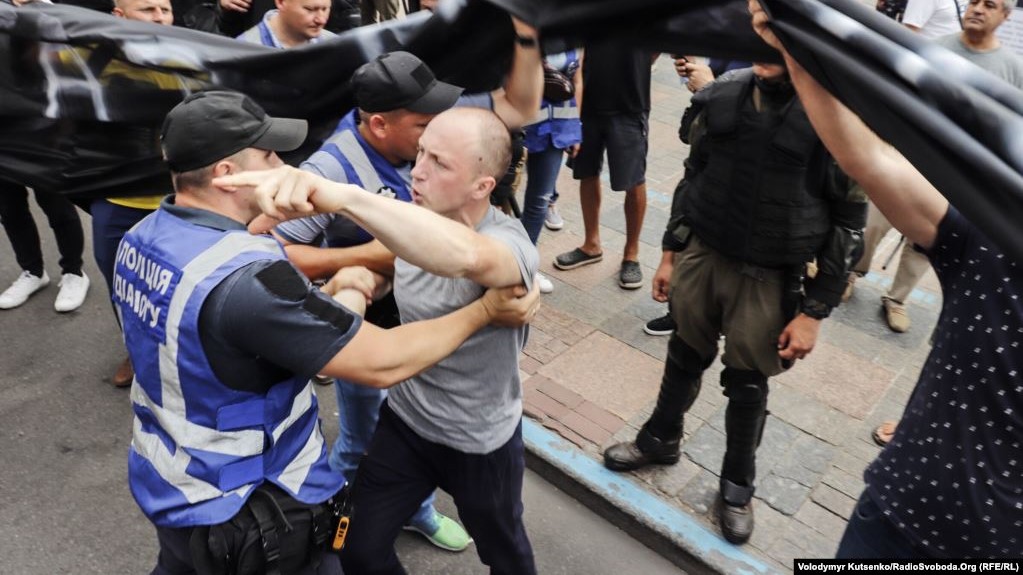 Svitlana Valko is a Ukrainian activist specifically focused on hate crimes. She monitors acts of digital and/or physical violence against LGBT activists for several NGOs. She spared some time to talk to Gender Z about the current situation in her country and the struggle and danger the Ukrainian LGBT community faces in the fight for their rights.

Svitlana, what makes you an expert on the topic of hate crimes against the LGBT community in Ukraine? 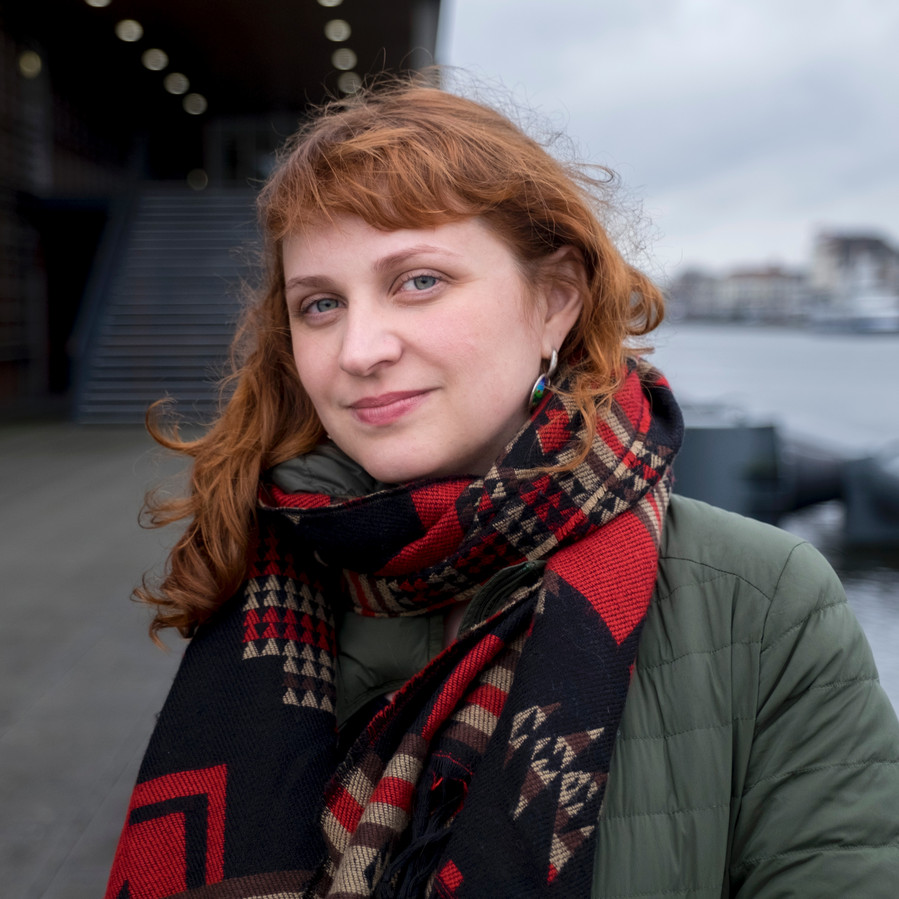 I am the founder of the NGO Truth Hounds which works in the field of human rights in Ukraine and in the region. For 12 years I have been working in public health with LGBT-related projects. Together with other partners in Ukraine, such as Freedom House for example, we have been monitoring attacks on activists and hate-related crimes in Ukraine for the last two years. We collect the data and try to push towards the investigation of these crimes by publishing the results, cases and statistics.

How did you first get confronted with the problem of hate crimes against the LGBT community?

My first experience must have been in 2002. I was working for an NGO, and during our projects I first came across stories where LGBT representatives were attacked in their private life, just because they are LGBT people. Some of them were beaten right in front of their house, for example. Some of them were blackmailed. These stories affected me a lot.

What is the reason for all the hate against the LGBT community?

I would divide this into two periods. Earlier, the incidences were mostly connected to personal homophobia. The attacks were mostly carried out by individuals who just read too much propaganda or who had prejudices against LGBT people. Over the last five years, the attacks have become more and more organized; they are crimes committed by right-wing groups. Those right-wing groups just need an enemy. That means the enemies do not necessarily have to be LGBT people only. For example, in Ukraine, the March of Equality was attacked, and the participants were mostly women, as the 8th of March is also Women’s Day. They attack feminists, too, for example. Recently they attacked a group that was supporting Polish women in their fight for the right to abort.

In general, they choose LGBT people and LGBT organizations as their enemies, but I don’t feel like this is an inner hate inside Ukrainians. Because our society is quite tolerant. Usually, most fears appear when you don’t know anything about a certain subject, but when there are no conflicts, Ukrainians are quite indifferent. It is not a super-aggressive conflict within the nation. However, the number of right-wing groups is rising, and that is directly connected to the war and the crisis that we have been going through over the last seven years. This is the cause of the increasing radicalization.

What does Ukrainian legislation say about hate crimes?

We have it in our legislation, but we do not have many precedents. The police and the judges don’t have the practice, and they don’t know how to deal with such cases. Very often the police only register them as acts of hooliganism, so it is quite difficult to categorize them as hate crimes. For example, there is a law that prohibits the interference during events held by organizations, and if activists get attacked during an event held by an LGBT organization, it is handled by this law, not as a hate crime. Very often, the police simply lack information and knowledge about hate crimes, so they simply handle them as hooliganism.

What are the most common types of hate crimes against the LGBT community? 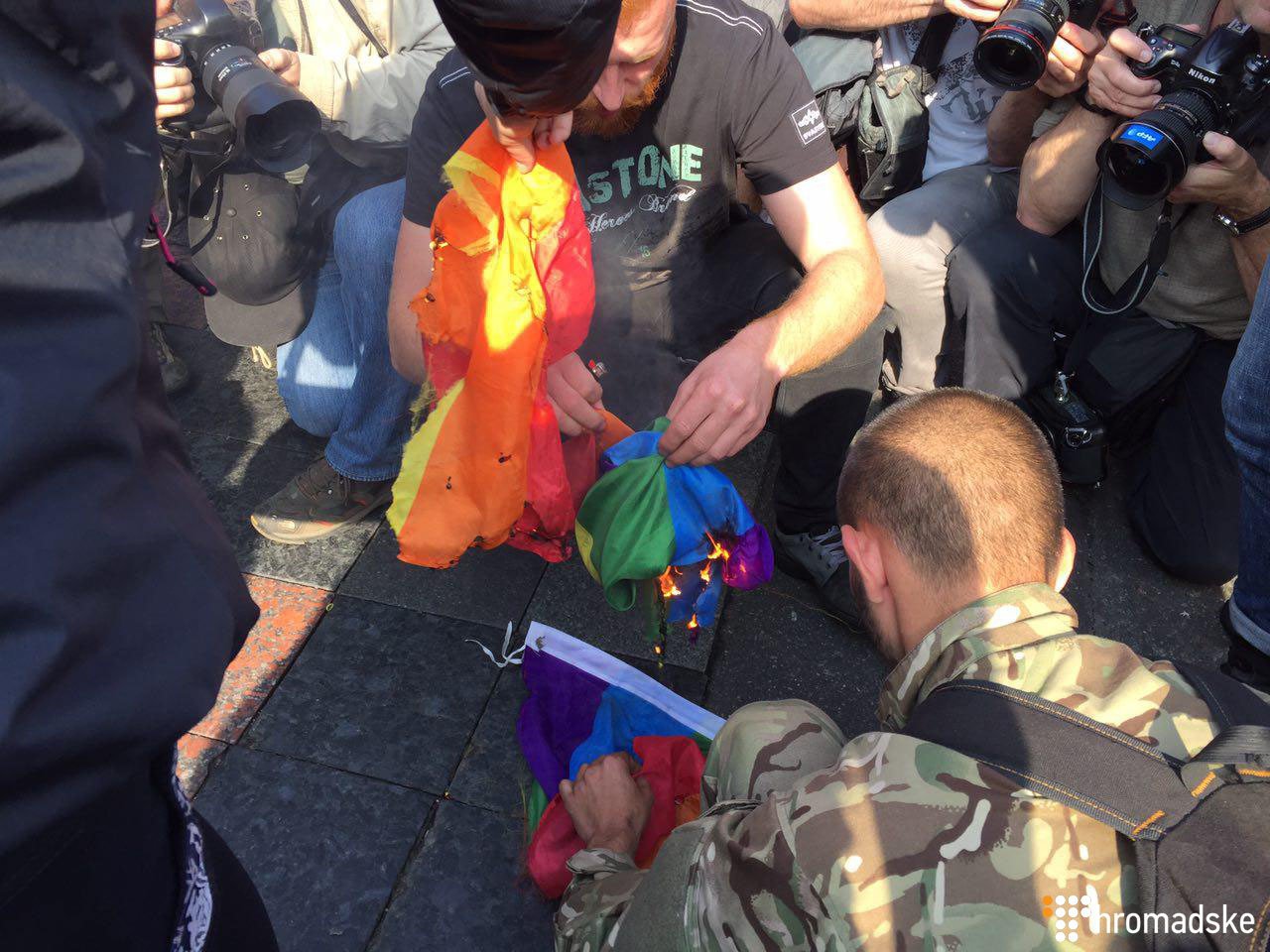 Counter-protesters burn a rainbow flag at the Equality March in Kyiv in 2017. Credit: Hromadske.ua

Of course, we don’t have statistics about all Ukrainian LGBT people, and most of them wouldn’t file a complaint anyway. What we do register, though, are the attacks on LGBT activists and LGBT events. In the last three years, there have been systematic attacks during LGBT events and marches for equality. Therefore, I’d say the most common attacks are physical attacks during the events that are somehow related to LGBT or gender topics. But sometimes their purpose is also just to block the event, so they do not necessarily have the intention to beat or even kill people. On the other hand, there have also been cases where people got seriously hurt by the attackers.

Another offense that is, unfortunately, not often registered is online threats against LGBT people. Especially on social media, they see so many threats that they start neglecting them.

In which way has the situation changed since the Russian invasion?

When there is an armed conflict in a country, the attitude towards radical groups usually changes. As soon as you have so much violence in a certain part of the country and people go into battle, you can see how the society becomes more radical. The use of violence in conflicts becomes more acceptable, in order to protect certain values with weapons, for example. This is not only Ukrainian, but a historically proved tendency.

At the beginning of the war, a lot of people volunteered to fight, and within their battalions they were treated and celebrated as patriots. That boosted patriotism in the nation. When they return from the war, they try to start other patriotic movements. For example, patriotic education for kids. Furthermore, the battalions of volunteers legitimized a little bit different patriotical movements, most of which are right-wing. They are ready to proceed with radical actions, even though they call themselves just patriots. In general, the level of radicalization always changes during or after a war, especially if it      lasts as long as it does in Ukraine. It is difficult to not see things from a radical perspective if you hear about people getting injured or killed on a daily basis.

What do LGBT organizations do to fight hate crimes?

Together with our partners, we try to fight the violence against any activists, but mostly from LGBT community. In the summer of 2019, 22 out of 38 attacks against activists were particularly against LGBT activists. We monitor the cases and inform the media as well as the law enforcement authorities. Other organizations try to push the authorities to further investigate and hopefully add hate crimes sufficiently to Ukrainian law. These campaigns are not super successful yet, however, we can also see that the more we talk about hate crimes against activists, the more things start to change. We get attention and the crimes are not only hidden anymore. But, of course, it is not enough to stop or prevent those attacks yet.

Are there emergency numbers for LGBT people if they urgently need help?

I don’t think those exist at the moment. Also, people that are most likely to get urgent help in Ukraine are LGBT activists. Individual LGBT people cannot get help, simply due to the lack of facilities. There was one shelter for LGBT people a while ago, but it was closed because of the financial situation. Providing shelters is very costly, and their safety requires a lot of maintenance, for example, when they need to change the location, in case the address was found out by radicals. Local NGOs cannot afford this at the moment.

Are there initiatives that offer psychological support for victims of hate crimes against LGBT people?

Yes, most LGBT organizations work with psychologists and provide such help. It is definitely possible to find such help, but an individual person might just not know where to look for it. Gender Z for example had a huge project to educate psychologists about the needs of LGBT people to increase their tolerance. Which was a very smart idea because it helped to improve the attitude of many people towards the LGBT community.

Do you have personal experience with hate crimes against yourself?

Not as an individual person, but as a human rights defender – for sure. In the last seven years, my main work has been to investigate war crimes on both sides of the conflict. I have been defamed three times on the Russian side. There were different kinds of false information about me online.

How do you think the situation will develop in the next few years?

It is very difficult to make a prognosis here, as this year is very special because of Covid-19. We cannot really predict what is going to happen. However, we can see that because most countries are in a lockdown or in a state of emergency, that gives the governments the opportunity to do things they were not able to do before. Also, currently Ukraine is fighting in a war, so nobody can predict how much attention is given to other issues, such as LGBT people.

Thank you, Sveta, for your time and input. All the best to you.