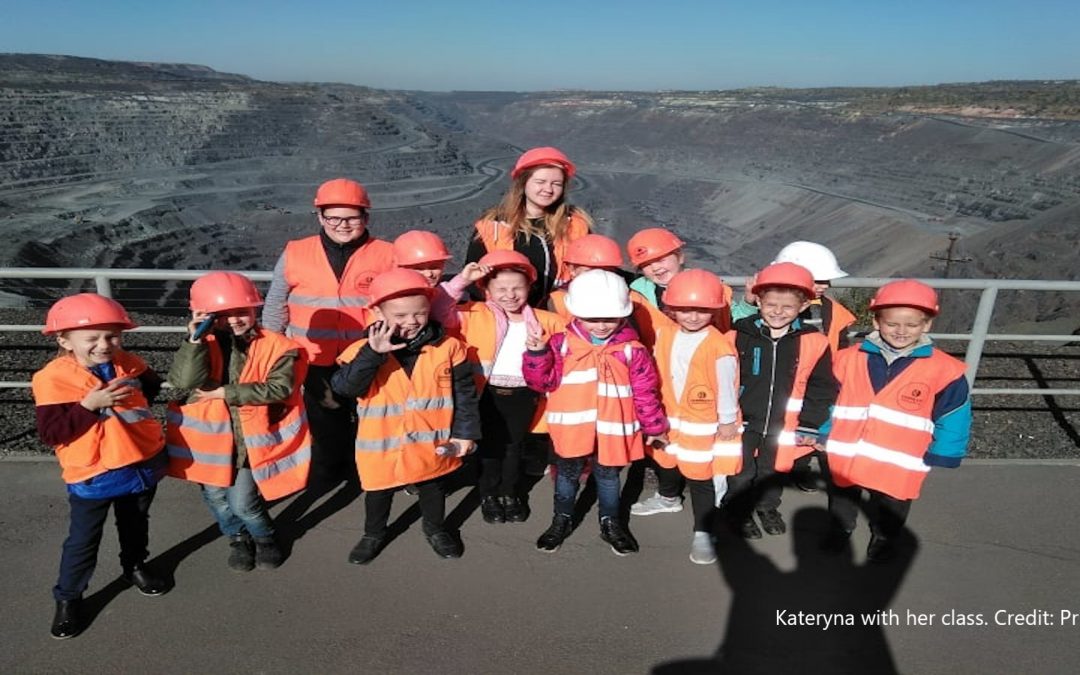 Kateryna works as a primary school teacher in an elementary school. Knowing that sex education is still an issue in Ukraine, she strives to create a safe space in her class for all children when it comes to different topics, including LGBT.

How long have you been a teacher? What kind of school do you work in?

I work in an elementary school, as a primary school teacher. My students are children from six to eleven years old. My school is not located in the most prestigious area of the city; there are mostly private houses there. The children come from different families, with different financial capabilities, which has its consequences.

What was sex education like when you went to school yourself?

I changed four schools, both urban and rural, and nowhere was the sex education that we teenagers needed so much. But there were many gender stereotypes, and our upbringing was based on them.

How did you educate yourself about LGBT people back then?

I learned about LGBT issues much later. Then I realized that I was one of them. “Wrong”, as my acquaintances would refer to them. I just didn’t think that love could be wrong. I started spending more time on social networks, where I was looking for “the same”, and then I found “my people” in my city. There were few of them, and I kept quiet about it because it was dangerous for my life.

Has there been a change regarding LGBT as a topic in schools today?

The schools are not ready to talk about this and do not want to. There is not enough tolerance or understanding in this topic. The parents themselves are also against. Many consider this to be propaganda, a disease … But children already know more about this, from the same social networks, because of the work of many organizations that talk about human rights, about the problems of LGBT people, about their existence.

So, it turns out that Ukrainian children learn about LGBT people from social networks, but often also in a negative way from their family and from peers and friends.

Do you see a lot of bullying in class? What do you do to prevent it?

Luckily not. It is my “trick” to create the most tolerant and friendly environment in the classroom. A personal example and dialogue can solve a lot.

Are you able to openly speak with the kids about LGBT issues?

… It’s my little dream to speak openly about this at school to support others.

Would there be legal consequences if you did?

I think yes. Maybe there would be a scandal, and some parents would even ask for the dismissal of such a teacher. My friends had such an experience.

Can the kids come to you to speak about the topic or to ask questions?

Yes, yes and yes again! I am completely ready to help, talk, discuss, or just listen not only to LGBT people, but also to anyone who wants to discuss this topic calmly.

How do you make them aware that they can come to you with questions, etc?

I always tell children that I am ready to help them, no matter what happens. They can trust me and I prove my words with actions. We have a rule: “there is no punishment for the truth”, and so far this rule has been producing good results for the classroom atmosphere.

Have there been negative reactions from school authorities or parents?

Yes. Once my colleague subscribed to my personal page, where my personal photos were. I blocked it because I was scared. After a while, the deputy principal came to me and said that she had been contacted by parents who allegedly threatened to go to the school principal. What they saw in my photos was unacceptable for them. It really unsettled me. But then I realized that it was my colleague and the outing continued. This makes clear that even adults who should be tolerant are not ready to see LGBT people in school by default. Parents also overlook offensive remarks about gay people. Unfortunately, there are many such examples.

In which way has the situation changed since the Russian invasion?

There are more such aggressive people now. But there are also good people, of course, and many of them. They are more often found in big cities, where people are less interested in other people’s lives but take care of themselves.

There are also more organizations that provide sex education, fight for equality and against gender stereotypes, and work on the rights of LGBT people and adolescents in particular.

What is your prediction for the future? How will things develop?

I want Ukraine to become more tolerant, human rights cannot be neglected. Now it depends only on us what the generation will be like when they grow up, and what our future will be like. But there are very few people who are ready to teach children to be kind, to be able to accept other people, to respect their own and other people’s personal boundaries. Children still grow up in homophobic families, and this is often harmful. We need more time. Maybe from 5 to 15 years.

Kateryna, thank you very much for the interview.