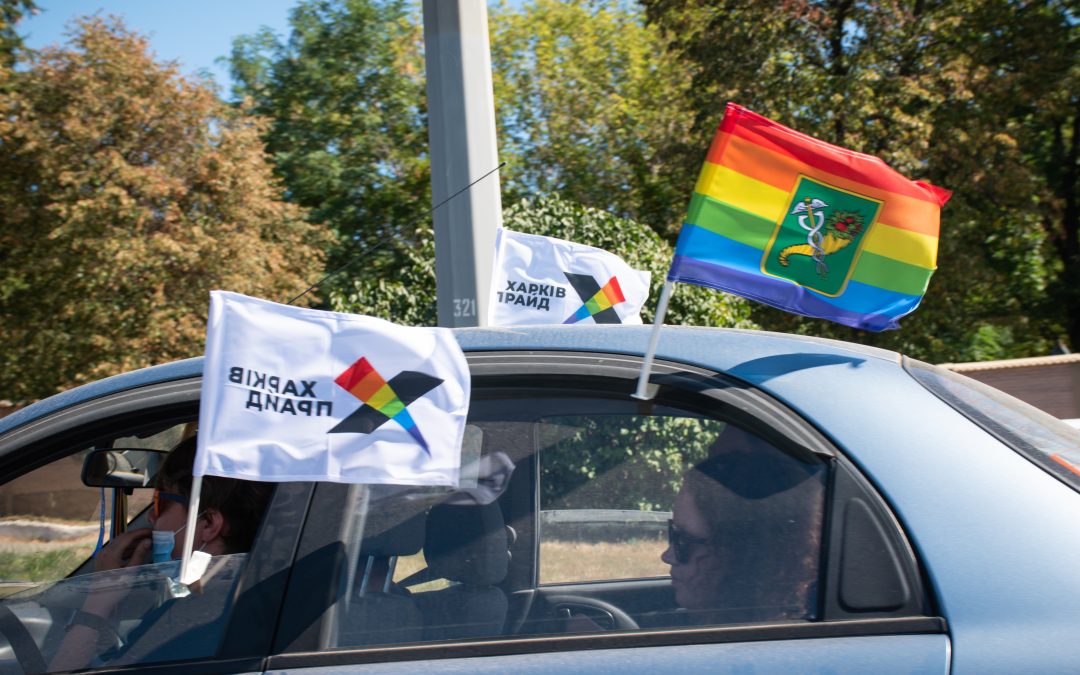 How to show visibility in a year like 2020? LGBT+ groups in Ukraine came up with creative ideas, even a Pride march was organized. Some regional organizations talk about their challenges of showing visibility every year and how these challenges have increased under the circumstances of the pandemic.

“I want to show that LGBT+ people are like everyone else and that they can contribute to the city of Zaporizhzhia,” explains Natalia Lobach about her motivation to work for the Insight organization in her hometown. “I want the people to see that she is a designer, he is an analyst – they are more than just LGBT+.” 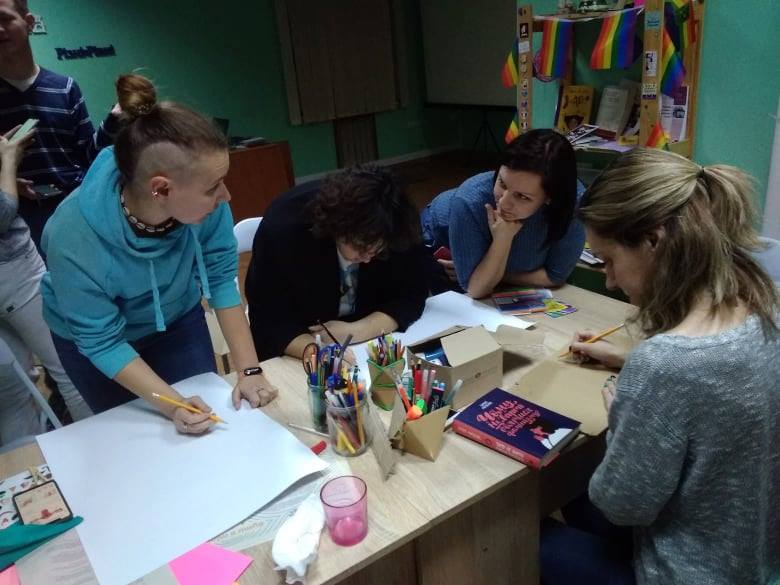 Insight is an LGBT+ and women’s rights advocacy group. Their main office is in Kyiv, the Ukrainian capital city, but an important focus lies on bringing visibility and safe spaces for the LGBT+ community to other cities as well. By now there are eight regional offices of the Insight organization. The regional offices host similar events and provide similar services for the community. As gatherings of up to ten people are allowed due to COVID rules, board game nights, workshops and lectures are adapted for ten people in person in the offices. The organizers got creative over the time of the pandemic: more and more events are held online or in a hybrid form. Olena Hryhoriak, the Insight-coordinator of Chernivtsi mentions four events every week. If the speakers and participants of the events allow it, the lectures and often femtalks get broadcasted for a wider audience to see and follow them. This has a nice effect: while there are only ten people in person, online there are 20 to 30 people following the broadcasted lectures and talks.

Natalia Lobach from Zaporizhzhia talks enthusiastically about her group discussions: “It’s a very powerful thing, when people are talking, and you can see them developing through this.”

The question how people are finding their offices and events shows another side of the life of the LGBT+ community in Ukraine: the Insight Zaporizhzhia team has to hide their address online, so opponents cannot attack the events. In both Insight offices in Zaporizhzhia and in Chernivtsi people who want to attend workshops, lectures or board game nights inside the organization only receive the address after registering via E-Mail. According to these E-Mails, the organizers decide whether the people have the right motives for showing up and are not planning to threaten anyone.

Olena Hryhoriak says she has an emergency button in her office: “So if something happens, and someone attacks me or the participants, I could call the security guard of the house.” Fortunately, she never had to use it.

The more challenging events for the LGBT+ community are open air events. Both offices hold these. There, the biggest concern is safety for the participants. However, absolute safety is not always provided.

Julia from Sphere Team in Kharkiv, Ukraine’s second biggest city, elaborates on the safety issue: “Only the police have the right to provide safety. But even they try to avoid the word ‘safety’ because they cannot ensure it. They say they do everything in their power to keep the event safe.”

Julia is the co-organizer of the Kharkiv Pride. Last year, in 2019, it was the first time in Kharkiv that a Pride march was made possible. With more than 1000 participants the event was very successful, even though the mayor wanted to forbid it because the local elections were coming up. The east of Ukraine is still quite conservative and homophobic due to the Russian influence.

“We had to ask our international colleagues and organizations and some foreign ministers to sign an open letter to the mayor. In the end he had to allow it,” Julia explains.

Also, according to the Ukrainian Constitution, peaceful gatherings cannot be forbidden, and they do not have to be registered beforehand. For LGBT+ events, however, safety must be ensured by the police and still people got attacked as a result of hate crimes against the Kharkiv Pride. This year, in 2020, the Pride could not happen due to the pandemic situation in the city. Still, the organization Sphere, which organizes pro Feminist and pro LGBT+ events, wanted to show the visibility of the LGBT+ community. The idea of an AutoPride came up. This means that instead of people marching with banners and posters, cars go around the city along a special route. The event’s organization was much harder because the cars must stay on the streets while people are able to walk around a square. In terms of safety, this event was much easier to organize “because there were no people physically exposed,” as Julia states.

“This year the police managed the situation quite nicely. They came up with the idea to give our opponents a wrong route, so we could safely go all the way without getting attacked.”

This year about 20 cars attended the AutoPride. Unfortunately, not a lot of people own cars, so there were not as many people as last year that were able to participate in the Pride event on the 13th of September 2020.

The only offline Pride march in 2020

One week later, a bit further in the west, back in Zaporizhzhia a Pride march took place.

Olia Mishevska, who was part of the organization team, explains: “As early as in December 2019 we started to plan the Pride or equality march for Zaporizhzhia, which should have taken place in May 2020.” 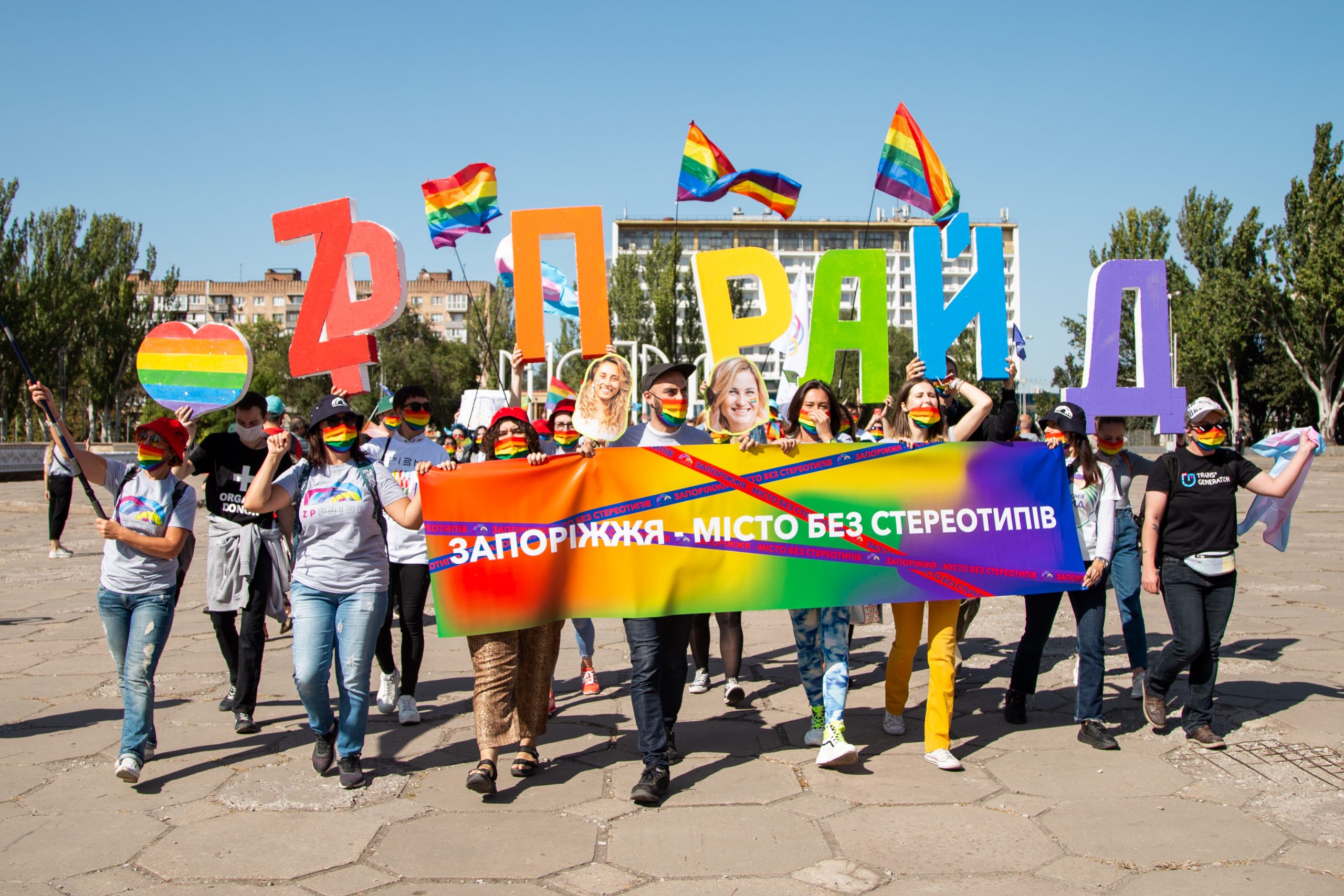 “This equality march should not be an event only for the community. The idea was to make it an event for everyone, the community and their allies,” as Olia Mishevska states. “We wanted to show that we should all have the same rights, no matter our sexual orientation, or gender, or whatever.”

Also, it was safer for everyone to have an event all together, not only the LGBT+ community. The actual plan for an equality march on 25 May 2020 did not work out due to safety reasons during the pandemic situation. Plan B for autumn, when the virus situation had calmed down a bit, was realised. On the 20th of September the event took place on a square in Zaporizhzhia. That was the safest location for the march to happen, as the police could protect the participants additionally to the fences that were put up. The whole event lasted 90 minutes. It was a combination of 450 participants walking around the square with banners in their hands and speeches following afterwards. Everything stayed safe and nobody was hurt during or in connection with the event. The organization team was prepared to react to any escalation of the situation. After the Pride march ended, the participants were brought to different spots in the city by buses, so they did not have to go home direct

Olia Mishevska thinks that it was possible for the Pride march to happen so peacefully because of the good organization, “but also we provided all the information about everything publicly via our social media channels. And on the evening of the day there was a big music festival about to happen in Zaporizhzhia with a lot of bands from all over Ukraine – so the mayor had all the intentions for the Pride event to stay safe.”

For Olia Mishevska, it was the first time to organize an event of such a scale. And she hopes it is not the last one. She says, the organization team did not make any plans for next year yet as they want to see how the pandemic is developing first. After all, she stays motivated.

Where does the motivation come from?

A big part of the motivation for all the people organizing events like Pride marches or coordinating the safe spaces for the LGBT+ community comes from the support by other people and from the change in society. As Natalia, Olena, Julia and Olia all stated: despite some right-wing conservative groups, overall, the society in Ukraine is changing and the people are becoming more open towards LGBT+ people. Still, a lot must change, and it is not safe everywhere yet but also, in cities other than Kyiv, Pride events and safe spaces for LGBT+ people are possible and growing.

German journalist; she is interested in Post-Soviet countries and how they deal with social challenges in the 21st century