LGBTQ* soldiers in the Ukrainian military: “We destroyed the myths” 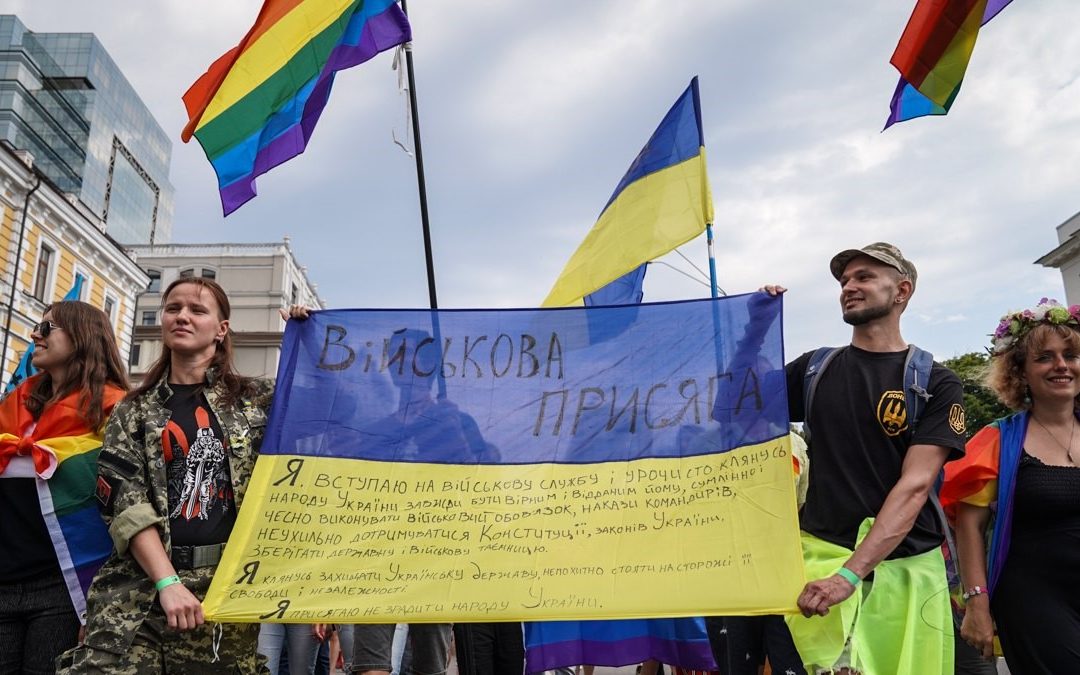 A conversation with Viktor Pylypenko about how gay Ukrainian soldiers fight for human rights and make the LGBTQ* community more visible.

Before 2018 Ukrainian society was convinced that there is no such thing as LGBTQ* soldiers in the military. Taking a look at sociological studies from the year 2018 and 2020 one can see that the army‘s authority level is stated as very high in Ukrainian society. People show a lot of appreciation and trust towards those who fight on the front line to protect their country’s independence. But for some reason it seems like this appreciation and trust was reserved only for those who fit in a binary, heteronormative system. However, in 2018 Anton Shebetko decided it was time for a little change. To show that the rumours about LGBTQ* people are not true and that there is indeed such a thing as homosexual soldiers fighting on the front line, he started his art project “We were here”, in which nine soldiers participated and one decided to have his public coming out: Viktor Pylypenko. 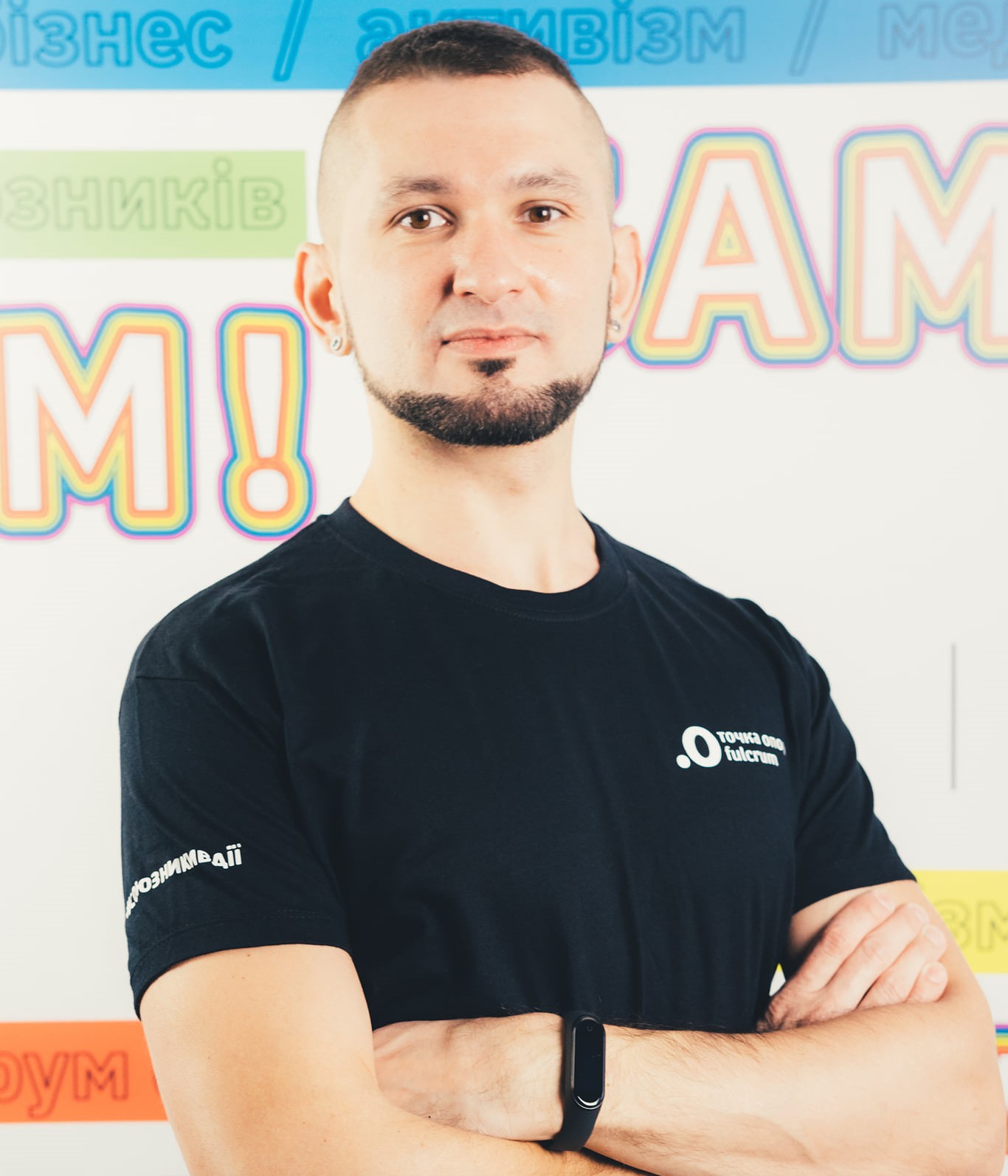 Rumours like “LGBTQ* people don’t serve in the Ukrainian army” come from an old Soviet presumption that soldiers have to be masculine, while gay men are considered “sissy” and therefore can’t serve in such a masculine labour field. Unfortunately, these rumours are wide spread in the Ukrainian society. Also, Viktor’s family believed in those rumours and didn’t think of him being gay. He describes his coming-out to his family as “an awkward moment”. After his public coming-out the media’s attention got caught and Viktor got stormed by people eager to interview him. He describes that time as an “information bomb”. Not only did liberal Ukrainian media want to write about him, the media within the occupied Russian territories “secretly” did their interviews with him as well. Viktor states that by that time he didn’t know who he was talking to. They used his coming-out to insult the Ukrainian army altogether, calling them an “army of pederasts”.

These were not the only challenges Viktor had to face after his coming-out. During his military service, he had to deal with insults from soldiers from other sub divisions and far-right groups within the army, saying he was an “idiot” and the only gay soldier. He even got attacked for religious motives, by someone who is now becoming a priest. Fortunately, Viktor didn’t get hurt and all his brothers in arms from his battalion were standing by his side and supported him.

“Close your eyes to some insults, to misunderstandings, aggressive people and try to find a way for exchanging information”

Since having to face challenges after his coming-out, Viktor started to understand how important it is to build a safe space for LGBTQ* soldiers and decided to establish a Facebook group. Creating a union of like-minded people helps to deal with feelings of loneliness and depression as well as fighting the thought of homosexuality as something against nature. Getting support from others, being able to express emotions freely, talking openly about one’s sexuality and not having to hide anymore is extremely important to the soldiers. For now the community counts 1647 members. It does not only include LGBTQ* people, there are allies who want to support human rights as well. They talk to each other online and spread the word about human rights over their social media channels. Viktor explains they are using their battlefield reputation to do so. They take care of train tickets to cities where equality marches take place, so they can show their faces and be present. They show movies about LGBTQ* topics to educate people who have never come across these topics yet. Through this work they make the LGBTQ* community more visible in society. It is their goal to convince people that prejudices against LGBTQ* people are not true, that they are indeed part of society, that being LGBTQ* is totally natural, that they have a right to be here and that they deserve the same rights as everyone else. After a year of voluntary activism the LGBTQ* human rights protection organisation NGO Fulcrum UA approached their union. Their help made it possible to cooperate with the Canadian embassy, the American embassy, and the Dutch embassy. The latest event they participated in was on 26 November 2020 at the round table at the Forum BAM (business, activism, and media). They invited heterosexual veterans that are allies to talk about marriage equality for gays and lesbians. One of the speakers was a member of the nationalist party Svoboda. But after his military service he changed his mind about LGBTQ* people and quit his work for the nationalist party. 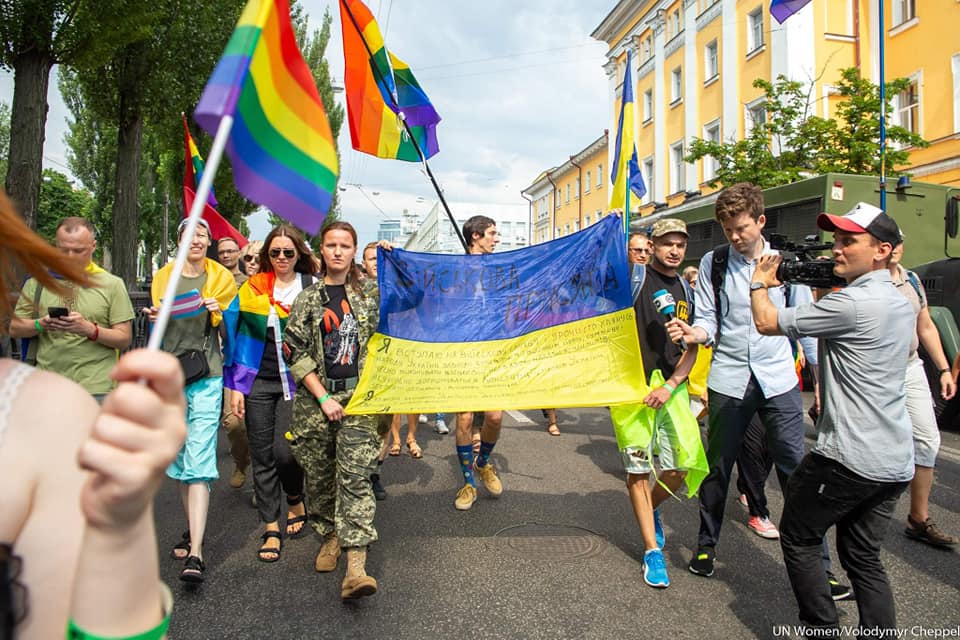 LGBTQ* soldiers and allies participating at the Equality March in 2019. Credit: UN Women

Even though many people changed their attitude towards the LGBTQ* community in Ukraine, there is still a lot to do. Trans people and people that are HIV positive are still banned from the army. Furthermore, officials use the lack of reports about homophobic attacks in the army and the legal situation as arguments to deny homophobia within the army. But it is known that there is still a certain level of homophobia, unacceptance, and concerns about human rights, especially in the Ukrainian military. Nevertheless, talking to such a positive, inspiring, strong and brave man as Viktor gives hope and security to the whole LGBTQ* community – that there are and always will be people that fight for equality and human rights.

Feminist from Leipzig, she focuses on inclusion, LGBTQ* issues, and wants to inform about controversial topics