Portrait(s) of Queer Ukraine – part one: Gay Love in Kyiv and Trans*Activism in Kharkiv 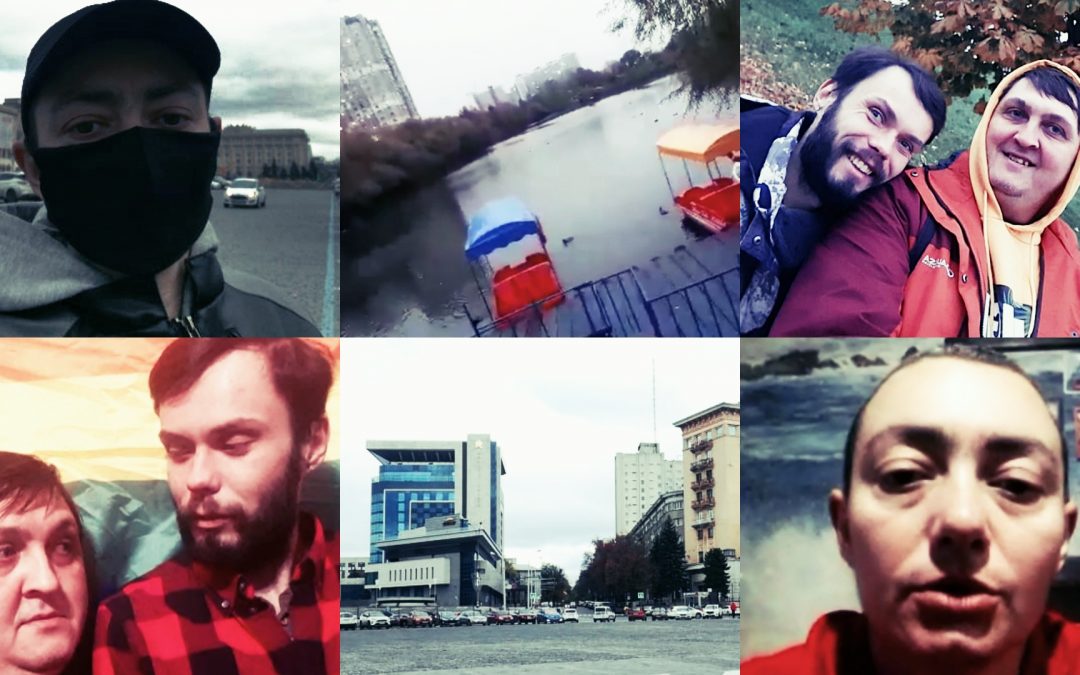 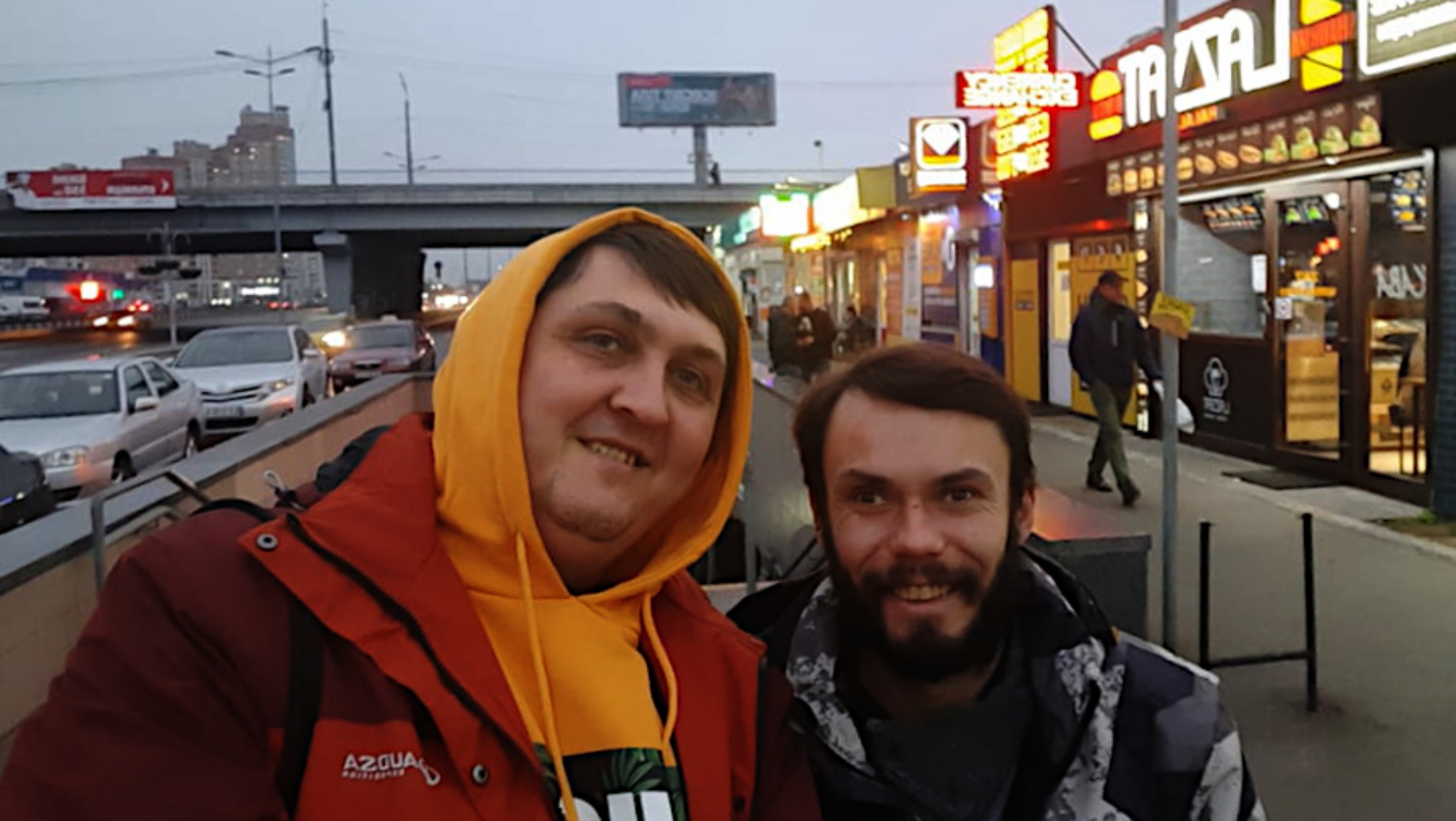 Denis and Sasha in November 2020 at the Metro station Poznyaki in Kyiv, where they first met three years ago. Credit: Private

D: We live together in Kyiv. For the first time we met at the metro station Poznyaki to walk to the lake.

A: We have been together for three years. But we moved in together later, he convinced me. I am 28 now and work as a chemist.

D: I’m 38 and work as a security guard, caretaker, activist. I am volunteering as a personal assistant to a boy with autism, in a Canadian project tried out in Ukraine. Sasha wants me to study social work. But for now we are learning sign language.

D: I have been struggling with myself since childhood. I even went to church, tried to free myself with prayers. Sasha is not my first partner, but only when we met did I accept myself. I also had relationships with women. But the sex was torturous for me. First I talked about it with my mother. Only eight years ago, when I was 30 years old and long ago moved from the Kherson region to Kyiv. When I was diagnosed with HIV, I called her. It was a double blow for her. We both cried. Now she just keeps asking me: “Did you take your pills?”

A: On a recent visit to Denis’ family for a baptism we were asked not to say anything about our relationship. I was “a friend” of Denis’. I felt like the fifth wheel on the wagon. But I myself have not yet told my parents that I am gay. I come from the Donetsk region. Just outside our town the war zone begins. But my friends all know. At work too.

D: We are quite lucky! Many must hide. But not us.

A: On normal days nobody cares. When we go shopping, we act like an old married couple. The first year we even held hands and kissed on the street.

D: People are not used to that. But I said goodbye, kissed him on the mouth and off I went. But often we don’t do that.

A: We also keep to a certain limit. Certainly unconsciously.

A: In five to seven years, I would like to have children.

D: A single person who has a stable income can adopt a child. The partner could then take care of the same child. That works for us.

A: If we at least had a registered partnership, many things would be easier. 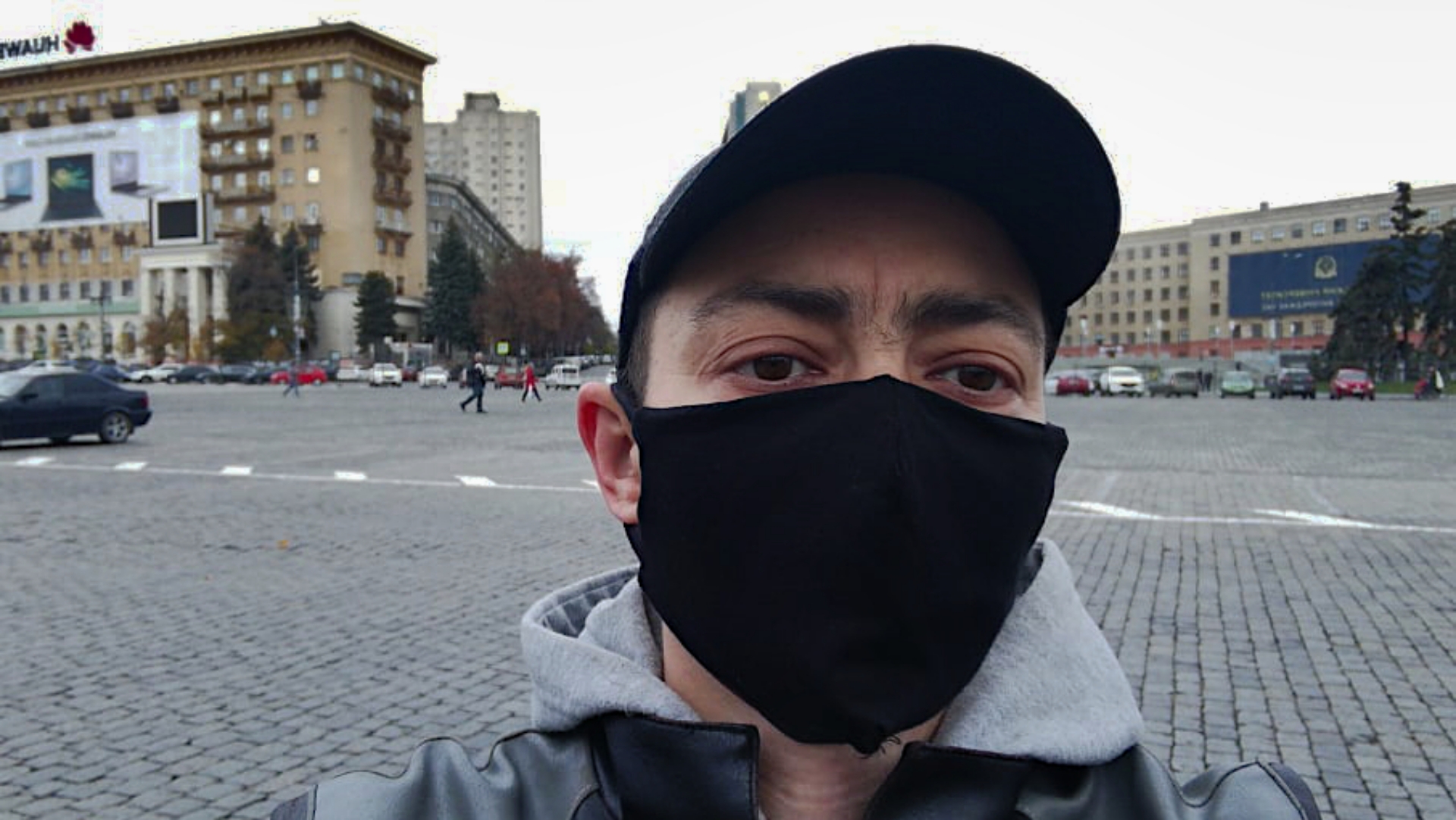 Ruslan in November 2020 at the main square of Kharkiv, where a few years ago he reacted in rage: I’m not a girl at all! Credit: Private

Since childhood I forbade myself to think about why I wasn’t born a boy. These thoughts only led to despair. I was sure that nothing could be done about this fact and it was dangerous to talk about my feelings. But one situation – in 2014 –was a landmark. Military vehicles were prepared for the annual City Day Parade. Young people climbed onto an APC. But I needed to get there more than anybody else! A guard shouted at me: “Girl, where are you going?” I shouted back: “Not a girl at all!” Only later I realized that I was screaming about it in the square. So, it’s time to admit it’s true.

As long as you live in the wrong gender, you make a psychological pact with yourself: hiding a “package” with feelings and desires. I have been interested in psychology for many years trying to find answers and help myself. Only after years of unpacking these subconscious feelings I understood: That’s not crazy, everything can be normal with me. No one can forbid me anything but myself. Then I wanted people to see me from the inside too. For trans*people one understanding person already reduces psychological pressure by 50 percent.

After I came out, most contacts broke off. I was bullied at work, nine full months of hell. It’s a bad feeling when close people look at you, then as if dust covers their eyes, and they can no longer recognize you. One buddy supported me, gave me a place in his garage. His mother is a nurse and wasn’t shocked but went looking for information. After I quit my job they fed me for a while and saved me when I was sick. Then I found a job in a call centre and today I am a good salesman.

My closest people are my partner, my friends, my cats. I feel free. Compared to 2016, a lot has improved. In the past, trans*people were invisible even within the LGBT community. But since Covid-19 broke out, many people have become depressed. Students had to return to their transphobic, misunderstanding and even violent homes. Trans*people need trans*people to receive support and understanding. But certain topics should be dealt with by professionals. But these are rare. I even heard a story when a guy was advised by a psychologist: “Tell them you have mood swings because of puberty.” I was shocked.

Because of emotional overload during the pandemic, soon I felt burnt out myself. But I enjoy doing my part to change attitudes towards trans*people through training sessions and seminars, where I act as a “living book”.