Hey, I’m a lesbian! And we need to talk.

We need to talk about what it takes to be a lesbian. Spoiler alert: it takes guts. Every lesbian kiss is a revolution – I love the way Alice Coffin put it. But before we start this conversation, you should know where I stand. I am a woman, I am a lesbian and I am a feminist. When I say “I”, I mean me. When I say “we”, I mean dykes*. I deliberately write lesbians* with a star to include every person of any gender identity who identifies as such.

[ The Ukrainian version of this article can be found here]

It was in the late 1990’s. At my boyfriend’s birthday party, I realised that I liked his sister better. I was twelve years old. I had neither seen a lesbian in the flesh nor ever used the word before. In the schoolyard, kids used to say “dyke” – and believe me, you didn’t want to be one.

No popstar, no actress, no sportswoman, no family friend, no social media… no role models. I was attracted to girls before I actually know that I could be a lesbian. At the age of thirteen, I secretly recorded a film broadcasted on French TV. Starring a lesbian couple with a kid, Not All Dads Pee Standing Up turned me upside down. I lacked the tools to notice the problematic title at the time.

In the summer of my fourteenth birthday, I met my friend Louana’s older sister. She had a teddy tattoo on her neck, beautiful grey eyes, a raspy voice and, more interestingly, a girlfriend. I was fascinated. Shortly after that, I had my first girlfriend myself, but I didn’t tell anyone. She eventually outed us to her sibling, who broke contact with her. I ended the relationship a few weeks later.

During my high school years, I stopped dating boys like I previously did. I was reduced to watching Buffy, while hating vampires and supernatural stuff. On Saturdays, I would join my brothers for binge-watching evenings, secretly praying for Willow and Tara to appear. I was craving for a kiss, some eye contact, a love gesture between the two girls. My heart stopped every time. Those were lonely years – until I met Rokia. I was sixteen.

Rokia and I fell deeply in love. At school, we were an amazing gang with our friends Kamel and Lola. We drove our teachers mad. We went for coffee, cigarettes and table soccer in our favourite bar. During the weekends, Rokia and I would meet at one of our mother’s. Her skin brought me to unknown places.

The day Rokia’s mother found out about us, she called me on my mobile. It was on a Sunday morning, right after my soccer game. I remember her words as if it were yesterday. I’d better never talk to her daughter again, she said, otherwise her big brother would beat the shit out of me. Scared and angry, I immediately cut off the relationship. Rokia told Kamel and Lola about us – I denied. Back then, I didn’t know about internalized lesbophobia.

I didn’t share the violence towards my first lesbian relationships with anyone. Around eighteen, I would even start dating a guy just to be normal. Sleeping with men was the most damaging thing I could do for my mental health. I wish the teen I was would have known the therapist, who told me years later:

Why on earth would you try to be normal?! You don’t fit in – and it’s awesome that way! 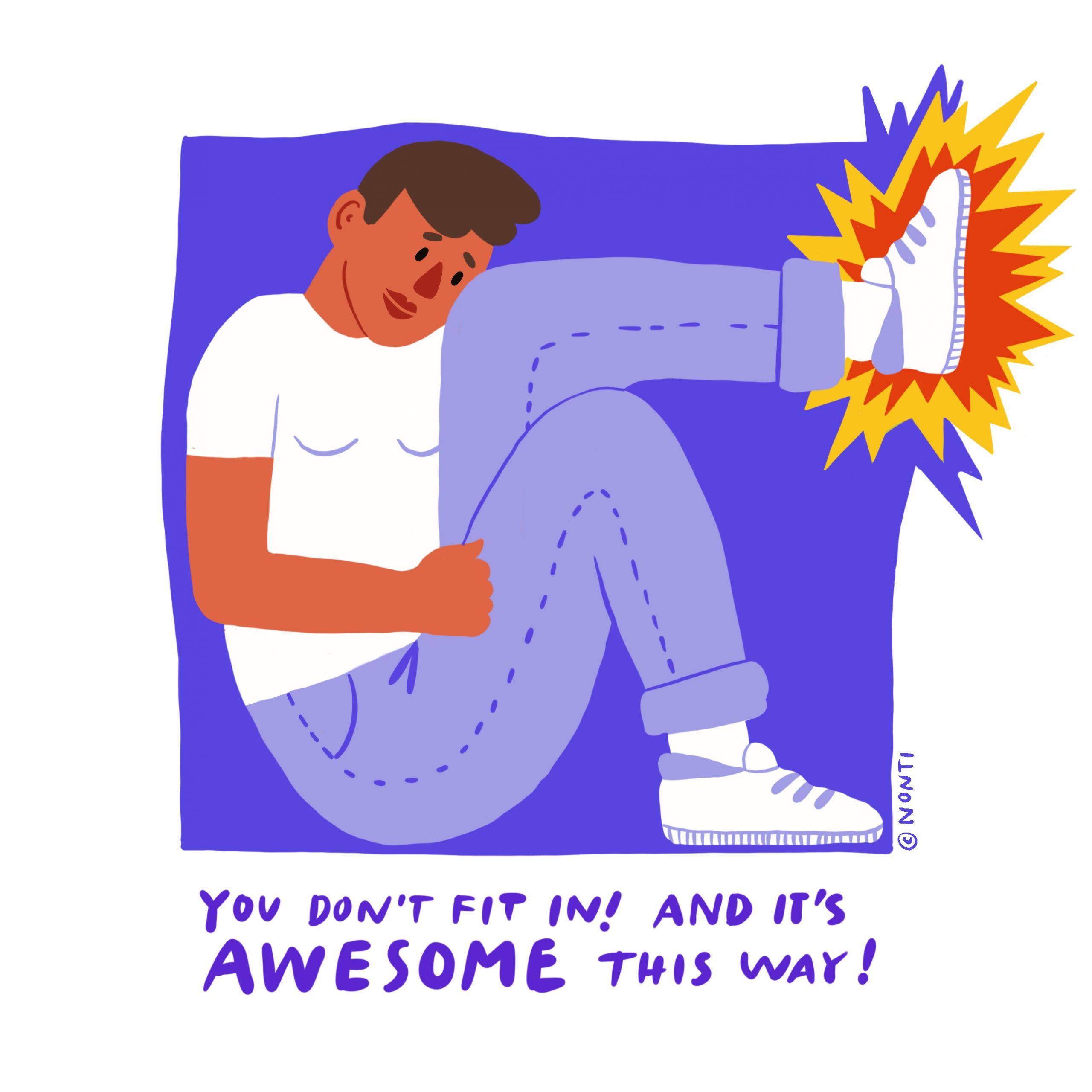 Fortunately, I met a girl in the college basketball team. She completely blew my mind. Dalia was the perfect reason to come out to everybody.

More lesbian* role models, but a long road ahead

Since the late 1990’s, things have changed. Girls grow up with lesbian* role models. There is Instagram and TikTok. The music industry counts a growing number of lesbian* icons like Angèle, Hayley Kiyoko and Kehlani. All over the world, sporty girls can see Megan Rapinoe, Caster Semenya and other lesbian* athletes perform in a variety of disciplines.

On the small screen, The L Word led the way. A lot of TV shows prominently featuring lesbian* characters followed the cult series. Netflix is working on LGBTQIA+ inclusion. Hannah Gadsby’s Nanette became a global stand-up phenomenon after its release in 2018. Movies like Carol, Circumstance, Kiss Me, Portrait of a Lady on Fire or Rafiki portray lesbian romances. People have even started telling stories where LGBTQIA+ folks can actually do more than be queer. In Germany, Princess Charming, the first lesbian* dating show worldwide, recently contributed to bringing lesbian* visibility into the mainstream.

Things have changed, but there’s still a long way to go. Lesbophobia is everywhere. Forty-three countries worldwide still criminalise lesbian* sex. Punishments go from fine paying to life imprisonment and death by stoning. But there is no lesbophobia in Europe anymore, you might say. You would be wrong. The current positive developments happening across Europe on a legal point of view are not enough. Forty-six percent of lesbians in the European Union still avoid holding hand with their partner in public for fear of being assaulted or harassed.

Beside sexual, physical and verbal attacks, we do experience another form of violence, which is not punished by law – erasure. 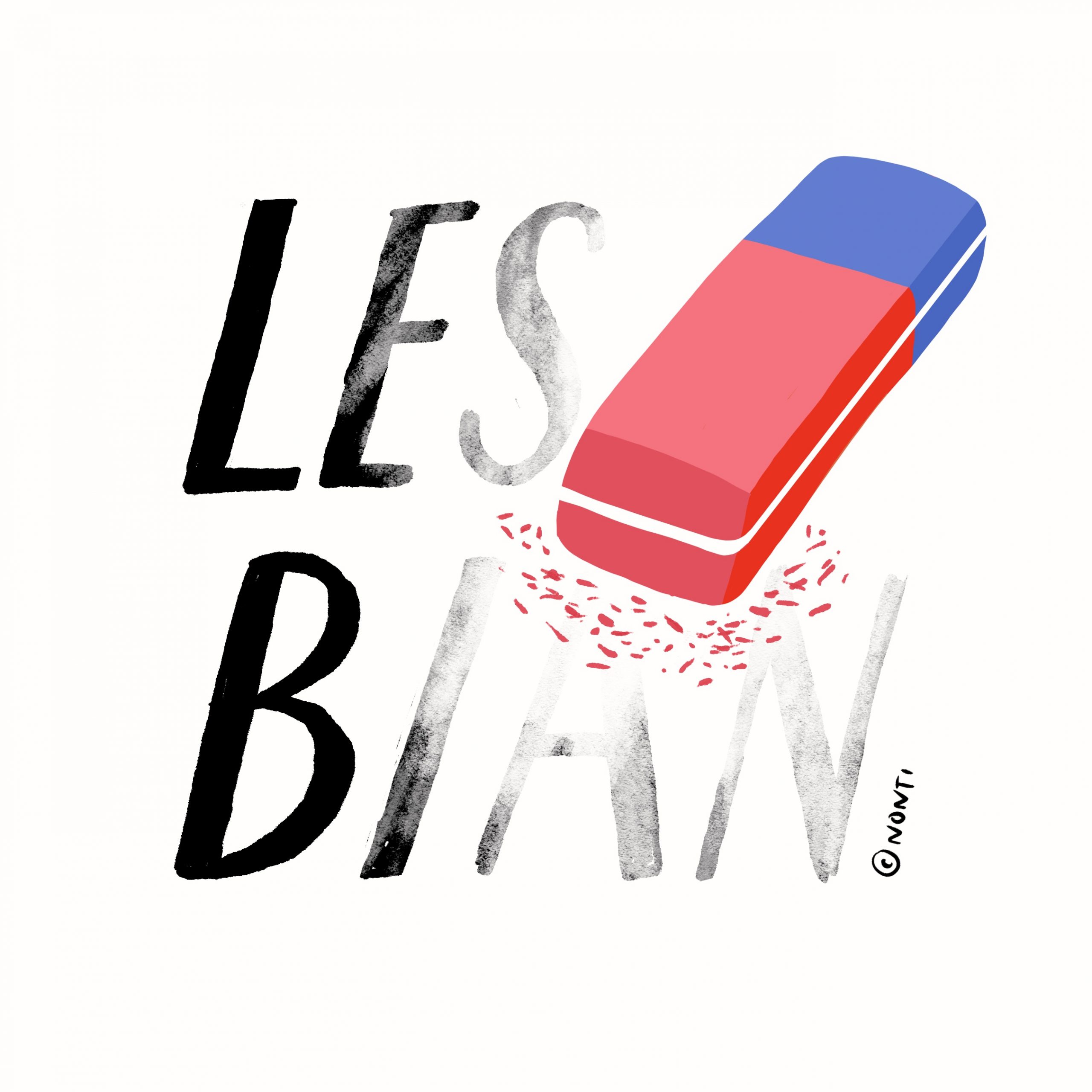 At the intersection of sexism and homophobia

Sometimes, various grounds operate simultaneously to produce specific forms of discrimination. It’s called “intersectionality“. Lesbophobia itself is at the intersection of two kinds of discriminations: sexism and homophobia. Not to mention the racism, transphobia, fatphobia and ableism that lesbians* experience too.

Unlike women in straight relationships, we don’t need men. So we challenge heteropatriarchal societies and their structures of power just by being ourselves. The problem: cis men occupy positions of power and they’re not willing to share the spotlight for the sake of equality. So we mostly remain invisible in politics, mainstream media, workplaces and public spaces. This historical refusal to acknowledge who we are has a name: lesbian* erasure.

And when we do show ourselves, when we fight lesbian* erasure, the consequences can be tremendous. After the publication of Alice Coffin’s Le Génie lesbien (Lesbian Genius) in 2020, the backlash was gigantic. Cis white male journalists who didn’t read the book claimed it was anti-men. The Catholic Institute of Paris stopped working with the author. Alice Coffin experienced cyberbullying. And it doesn’t seem to stop: she was publicly harassed during a conference in June 2021.

Since we don’t fit in, cis-heteronormative societies are shaming our identities. “Dyke” was meant to be a slur before we reclaimed it. Lesbians* are locked in an imaginary closet – and it takes courage to come out. The starting point of our love lives is a shameful, secret place. And it’s suffocating. Good news: cis-heteronormativity is a human fiction. As such, we can deconstruct it. 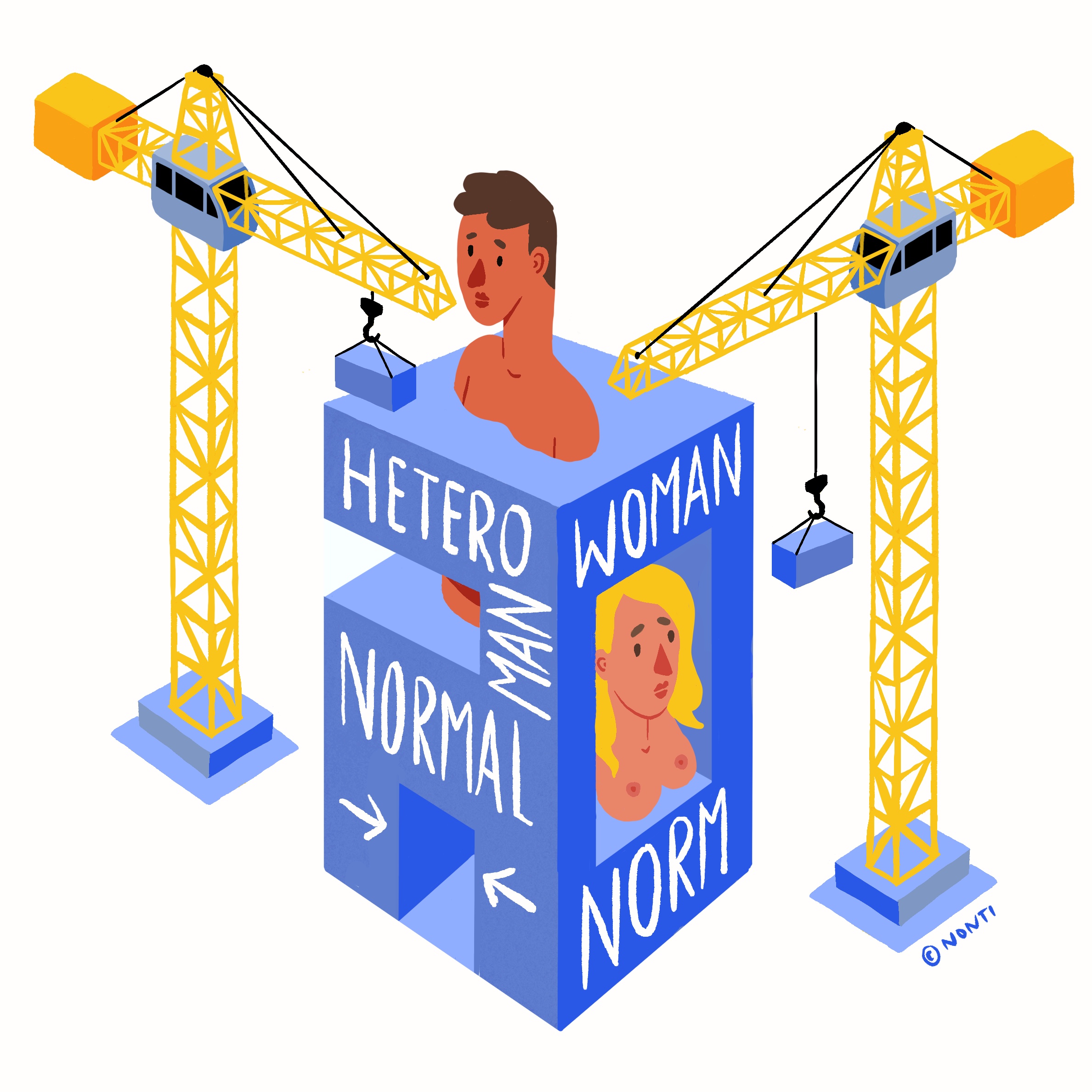 Refusing to see someone means denying their existence. As queer kids need role models to shape themselves, erasure is a public health issue. We, dykes*, shouldn’t have to come out. We have no confession to make – we are not guilty. It is urgent to free the next generations from the bloody closet. So let’s lead the way: let’s show ourselves.

Like erasure, silence can be incredibly violent. Abolishing toxic cis-heteronormativity involves putting our sexual identities into words. So, here again, let’s do it. Let’s jar on ears, tear blinders off and be proud of calling ourselves dykes*. Alice Coffin’s Le Génie lesbien (Lesbian Genius) is a tour de force: supported by the public outcry, she managed to get lesbians* talked about. LESBIAN. The French author underlines that we should write, say and repeat the L-word until it stops being a taboo. By naming us, she breaks the silence. She acknowledges our existences – and forces the whole world to do so.

So let’s be out, loud and proud? At least, that’s what my heart says. But the truth is much more complex than a catchy slogan. If visibility can bring safety and initiate the deconstruction of cis-heteronormativity, it can also be dangerous. We should show and name ourselves, provided that it’s not threatening our life, mental health or physical integrity. That we feel strong enough to face lesbophobia. Let’s always remember that closet shaming should not exist. Coming out is a personal decision – and it’s okay not to.

Kids are like sponges. They absorb our values, act through unconscious imitation and believe what they hear. Therefore, setting an example is the responsibility of all. And the house is burning. We need to create spaces where our children feel safe – at home, at school, on the street. We need to free ourselves from sexist and homophobic patterns. We need to imagine inclusive manners of speaking. We need to be kind. And if your kid is queer, stop wondering who is responsible. Stop searching for reasons. Just give them a big hug and tell them “I love you”.

French Copywriter & Creative Translator based in the region of Munich, Feminist and Lesbian, LGBTQ+ astivist, Cofounder of L*-AUX, a safe space for lesbians* and queer women in Augsburg.