Lesbophobia and lesbian* visibility in Moldova: “Erasure is the result of patriarchy” 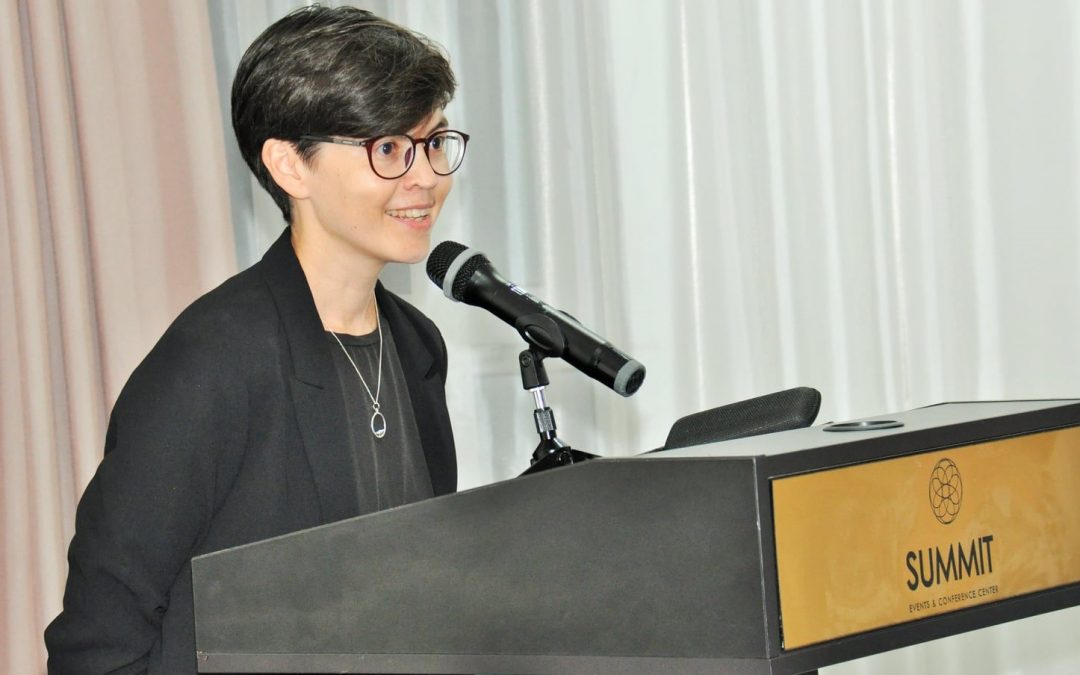 Feminist and lesbian activist, Anastasia Danilova is the Executive Director of GENDERDOC-M, the first NGO protecting the rights of LGBTQ+ people in Moldova. She is also a board member of ILGA-Europe and of EL*C. In the interview, she talks about lesbian* erasure in Moldova and explains why lesbophobia and lesbian* visibility are missing from the conversation in our cis-heteronormative societies.

[ The Ukrainian version of this article can be found here]

Thank you for agreeing to talk about lesbophobia and lesbian* visibility. Is lesbophobia a major problem in Moldova? What form does it take?

Anastasia: Moldova is a country where issues of human sexuality are taboo. Therefore, there are a lot of stereotypes in society regarding LGBTQ+ people, which create homophobia, lesbophobia and transphobia. On the one hand, gay men face much more discrimination and hatred from society. If we talk about physical aggression, it is more likely directed against gay men. But if we look at lesbians from an intersectional point of view, it becomes obvious that a homosexual woman in a Moldovan patriarchal society does not live any easier than a homosexual man. 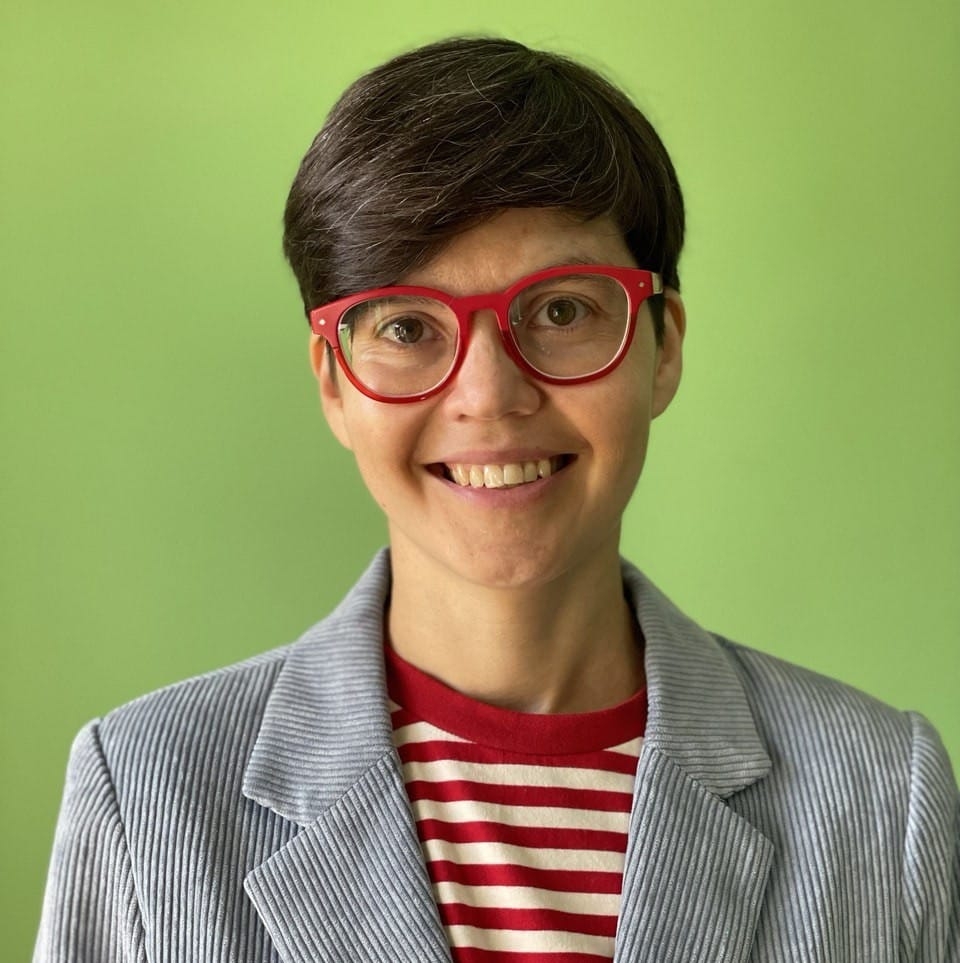 What kind of discriminations are lesbians* confronted with?

Anastasia: Most of the institutional homophobia is directed at the LGBTQ+ community as a whole. Homophobes do not differentiate. Therefore, in general, the LGBTQ+ community faces hate speech from politicians and priests, with attempts to pass restrictive laws (for example, the laws on the so-called “prohibition of propaganda”) and a refusal to provide services. Hate crimes are still a huge problem. We had a case where a girl was beaten by her neighbour twice, the second time for calling the police after the first beating. We also had cases where, lesbian or bisexual women who were previously married, had their ex-husbands, the fathers of their children, use their sexual orientation in court during the divorce process in order to sue for the right of custody of their joint child.

Do you think that lesbophobia is a systemic problem?

Anastasia: Lesbophobia is directly related to patriarchy, and therefore is a systematic problem. Lesbians* are subject to multiple discrimination, since they are not only women, but also homosexual. Both of these identities are very low on the hierarchical ladder of patriarchy, which leads to neglect the problems of lesbians, the deprivation of resources and erasure.

What is lesbian* visibility and why is it important?

Anastasia: The visibility of lesbians is, first of all, a statement about the existence of lesbians. It is an opportunity to talk about yourself and your problems, about who you are and what your life looks like. This is important because until we declare ourselves publicly, we do not exist for society. Sometimes, we do not even exist in our own community, when the letter L is erased from the abbreviation or is only nominally in it. Visibility means gaining your voice. For me, it starts with a statement: I am existing.

Is there an erasure of lesbians* in your country and how is it noticable?

Can the lack of visibility be dangerous? In what way?

Anastasia: This is a very interesting question. On the one hand, visibility is a risk. But on the other hand, visibility also means protection. Most of the hate crimes are committed against LGBTQ+ people who are not out, those who are afraid to report to the police – and aggressors know they will go unpunished. I am a privileged lesbian, I work for an LGBTQ+ organization and I have no risk of losing my job due to coming out. Many other lesbians risk losing their jobs or being left without the support of their families. Especially those who are still financially dependent on their parents. Very often, coming out leads to a rupture of relations with the family or even to domestic violence. 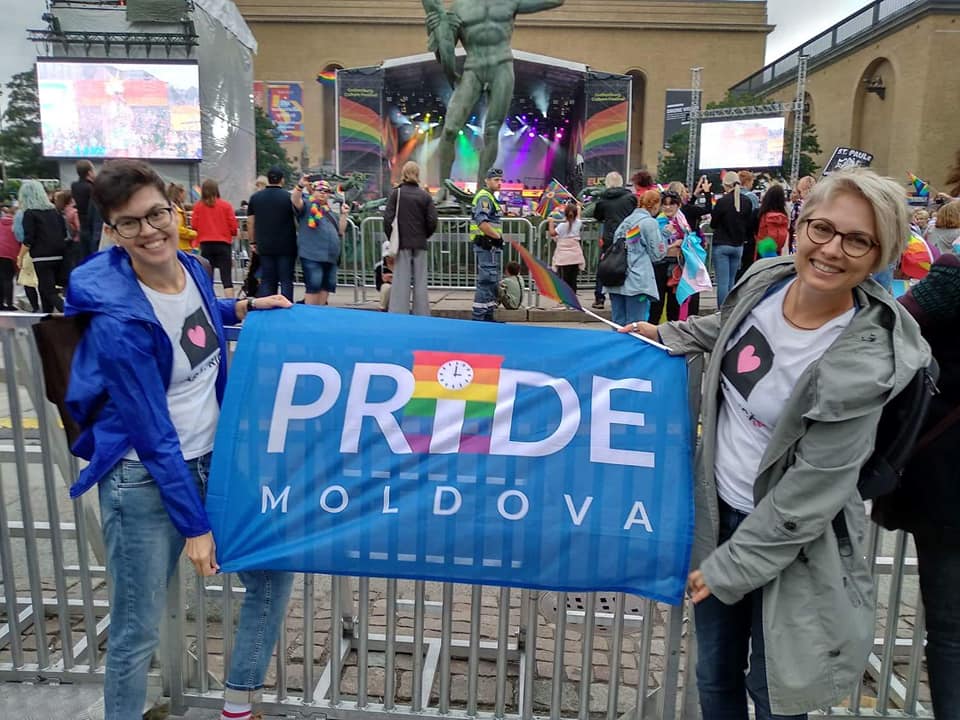 Photo: Anastasia Danilova and Angelika Frolov at the Euro Pride in Gothenburg; from Anastasia’s personal archive

Visibility means exposure. How can we fight for visibility while keeping lesbians* safe?

Anastasia: At the same time, when we are not open, this is also vulnerability. We had a case where a security guard at the university blackmailed a couple of girls. Realizing that they were in a relationship, he threatened to tell the dean or rector about them and requested sexual services in exchange of his silence. We intervened in this situation, after their reporting. Unfortunately, we could not bring him to court, but we were able to stop it.

Of course, each case is individual. Our task is to support and tell about the consequences, to provide legal and psychological assistance, but in no case to rush things. Everyone should decide for herself how much she is ready to be open and to come out. We can work together to make this society safer, which is slow, but we can, for example, at least give safety to a family – we have a support group for parents of LGBTQ+ people.

I think so, yes. Unfortunately, we don’t have such places in Moldova. But for me, these are places of power. Lesbians* need their own separate spaces to discuss what they are facing with those who know this from their personal experience. Visibility starts with empowerment, which occurs in such places.

Is erasure the result of a conscious or unconscious discrimination mechanism?

Anastasia: Erasure is the result of patriarchy. People who do not matter, who do not have power or resources are invisible. That is why appearing and making a statement is about taking back power.

Lesbophobia is a form of intersectional discrimination, since lesbians* suffer at least sexism and homophobia. Racism, ableism, fatphobia and other discrimination can come on top of that. Would you say that systemic sexism and lesbophobia are reproduced within the LGBTQ+ community itself? If so, in which ways?

Anastasia: LGBTQ+ people do not live in a vacuum. They are born and grow up in a society full of sexism and heteronormativity. Therefore, within the community itself, especially among cisgender men, there is a lot of sexism. One example of lesbophobia within the LGBTQ+ community is a persistent stereotype that in fact there is no lesbophobia, lesbians are doing well, and only gays are suffering.

Are lesbians* and women within the LGBTQ+ community underprivileged like they are in society and if so, is there concrete evidence of that – for example, in budget allocations?

Anastasia: Yes, definitely. And it does not even depend on the financial management of some LGBTQ+ organizations, but in general on what there is money for in our structures. For example, half of my organization’s budget is funds aiming at reducing the spread of HIV and other STIs. Of course, these are very important problems that require huge financial investments. But all these programs are dedicated to gays and MSM (men who have sex with men). Now, they have begun to include transgender people, which is already very good. Organizations capable of allocating specific funds for lesbians* are themselves small and their budget is incomparably smaller than the budgets of large organizations that allocate money for MSM. 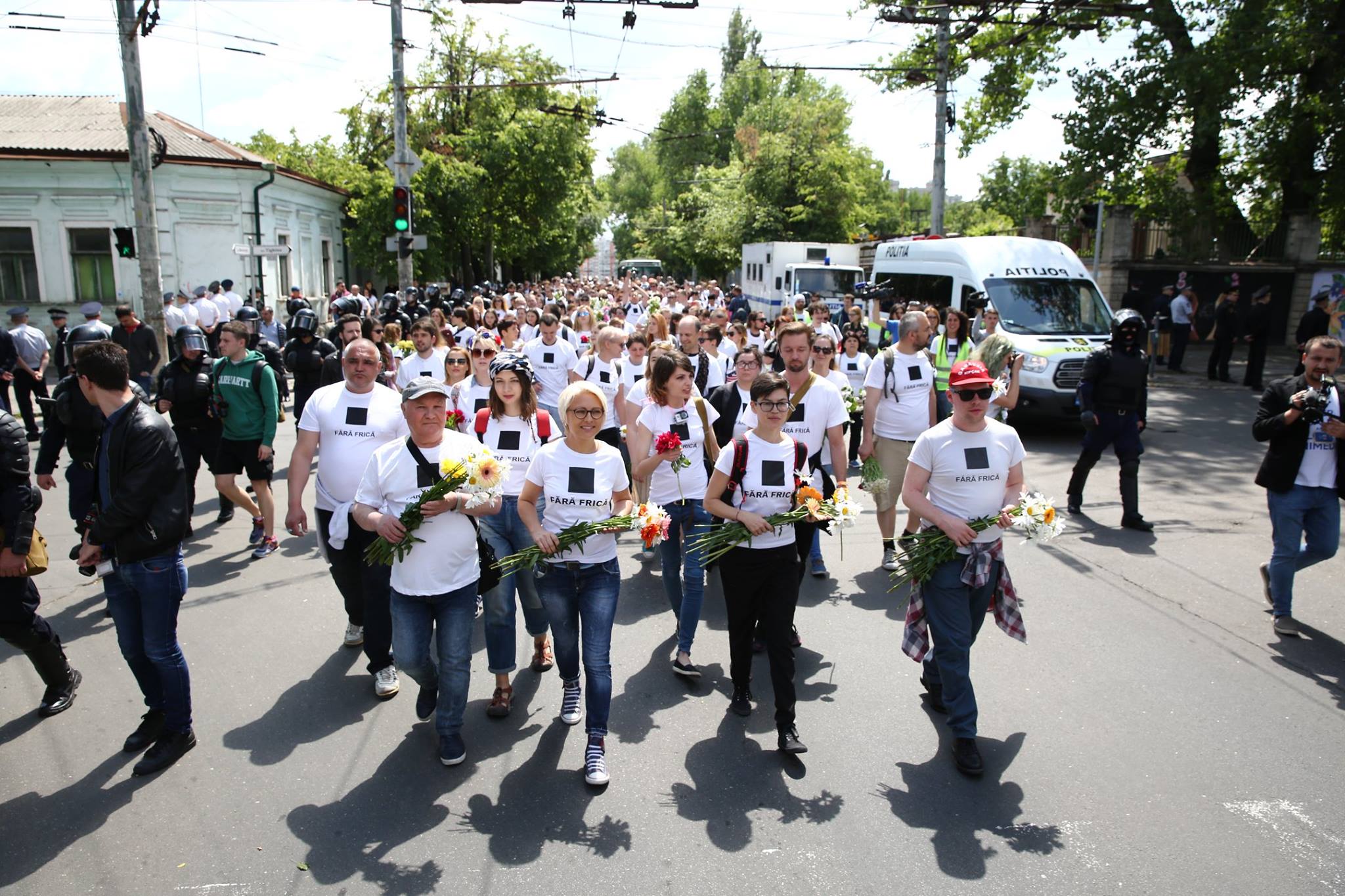 Photo: Anastasia at the “No Fear” pride march in Chisinau in 2017; from Anastasia’s personal archive

How can we raise awareness about lesbophobia and tackle this issue within the society and the LGBTQ+ community itself?

Anastasia: We need more open lesbians*, famous open lesbians*, information campaigns that they would take part in. This is a vicious circle, because in order to reduce lesbophobia, we must be visible and there must be many of us. On the other hand, it is because of lesbophobia that many lesbians are not ready to be open. We try to follow parallel paths: help people to accept themselves and respect themselves, and make society more tolerant (I don’t like this word, but it is a first step towards an open society) so that coming-outs become less dangerous and traumatic.

Are Dyke Marches and lesbians*-only spaces a good answer to lesbophobia and how?

Anastasia: In Moldova, this is not possible yet. At the moment, we do not have a critical mass of open LGBTQ+ people and allies. Therefore, we cannot conduct separate marches. We unite all our efforts to jointly oppose forces that are much larger, both in number and in power, than we are. But in the end, of course, I think that specific lesbian events, marches, meeting places and bars are spaces for strengthening and uniting lesbians, and an opportunity for reflection and understanding that we have problems that we need to talk about together in order to be heard. 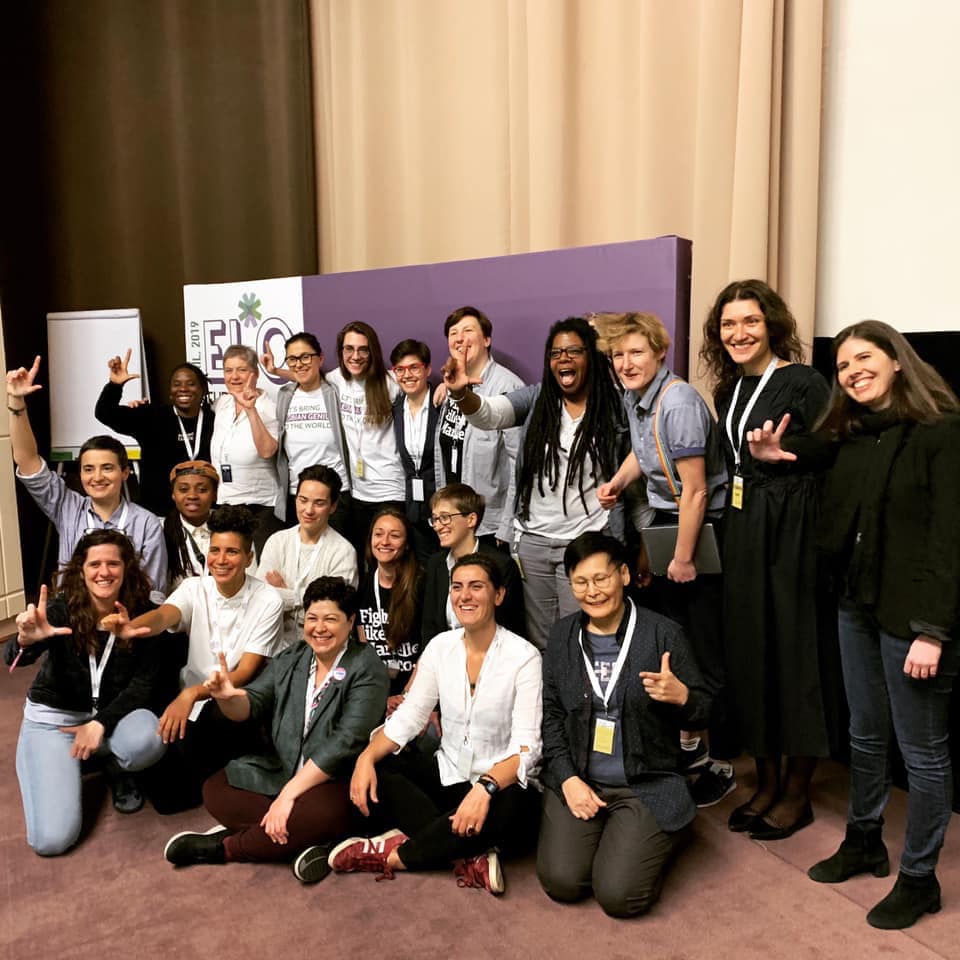 Would you say that lesbophobia is currently decreasing/increasing in your country and why?

Anastasia: I think that lesbophobia is gradually decreasing and this is largely due to our visibility. My girlfriend from college runs her own show on television. Everybody knows that she is an open lesbian*, but this is no longer playing a role for people who have begun to respect her for the important social topics they bring up in their programs.

Thank you so much for your time!

French Copywriter & Creative Translator based in the region of Munich, Feminist and Lesbian, LGBTQ+ astivist, Cofounder of L*-AUX, a safe space for lesbians* and queer women in Augsburg.