LGBT in Moldova: “Hate against LGBT is systematically instilled in people by politics.” 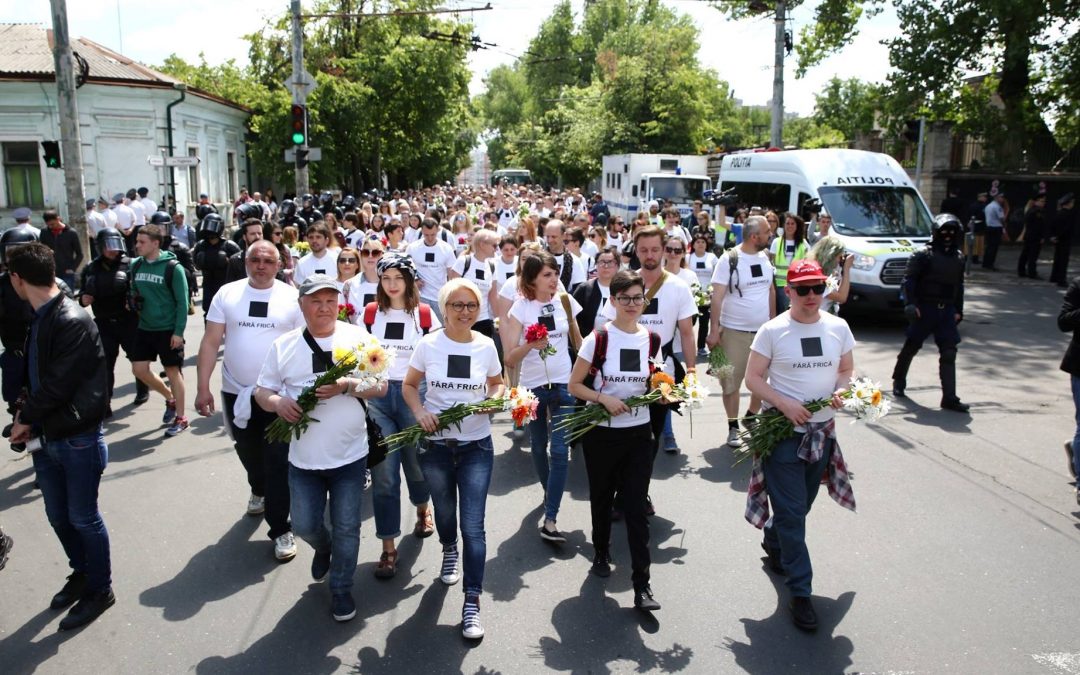 Even though homosexuality is officially legal in Moldova, the situation is difficult for the LGBT community in the small country located between Romania and Ukraine in the post-Soviet space. Hate speech in election campaigns as well as the influence of the conservative Russian Orthodox Church make life especially difficult for gay men.

Anastasia Danilova is an LGBTQ activist and Executive Director of Genderdoc-M Information Centre in Chisinau. Genderdoc-M is Moldova’s only LGBT rights NGO and was founded in 1998, making it one of the oldest and largest LGBT organizations in the post-Soviet space. “We inform people about LGBT issues and collect cases of discrimination,” Danilova says. “We also provide training and monitor hate speech against LGBT people in our country.” Furthermore, Genderdoc-M also offers a health program that focuses on HIV/AIDS on the one hand and mental health on the other, she said. Further, he said, there are also support groups for LGBT people and family members of LGBT people.

Homosexuality is no longer illegal in Moldova since 1995. “However, this was not a decision of Moldova,” says Anastasiia Danilova, “but it was a requirement of the Council of Europe. Moldova was eager to become a member there and that’s why it decided to decriminalize homosexuality.” However, she said, this did not entail a comprehensive change of the law. “Pressure from the European Union is often the only tool we have,” the activist explains. “That’s why we usually turn to our European partners when LGBT people are discriminated against in Moldova.”

There are only three laws that affect LGBT people, Danilova said. In 2013, an anti-discrimination law came into force, but its only paragraph refers mainly to the field of labor. “However, Genderdoc-M’s work has shown that we can use this paragraph against discrimination in other areas of LGBT life as well,” Danilova said. Another law, she said, is freedom of association, which came into force in 2008. “Sexual orientation is not explicitly mentioned in it, but we used this paragraph against the state of Moldova in 2006. But only in 2012, we received an official decision from the European Court of Human Rights saying that by banning the Pride march, Moldova was guilty of discrimination against LGBT people,” the activist says. The third law is the 2009 Right to Asylum, which explicitly names sexual orientation. However, she says, this is rarely referred to by Genderdoc-M, as LGBT people are more likely to emigrate rather than immigrate due to the situation in Moldova. “At the same time, it is a shame that LGBT people have to leave their country and family just to finally be themselves.”

Regarding same-sex marriages or adoptions, however, there would be no legislation at all.

However, the organization of Pride events has been possible since 2002, even though in subsequent years events were often canceled by the responsible government. Although the Pride parade is lined with police officers, Danilova says, this, in turn, restricts the freedom of movement and thus the visibility of the LGBT community. For many residents of Chisinau, this makes the Pride march invisible. At the same time, the police often refuse to record hate crimes against LGBT people as such. “In the official statistics in Moldova, there are zero hate crimes against LGBT people,” Danilova said. 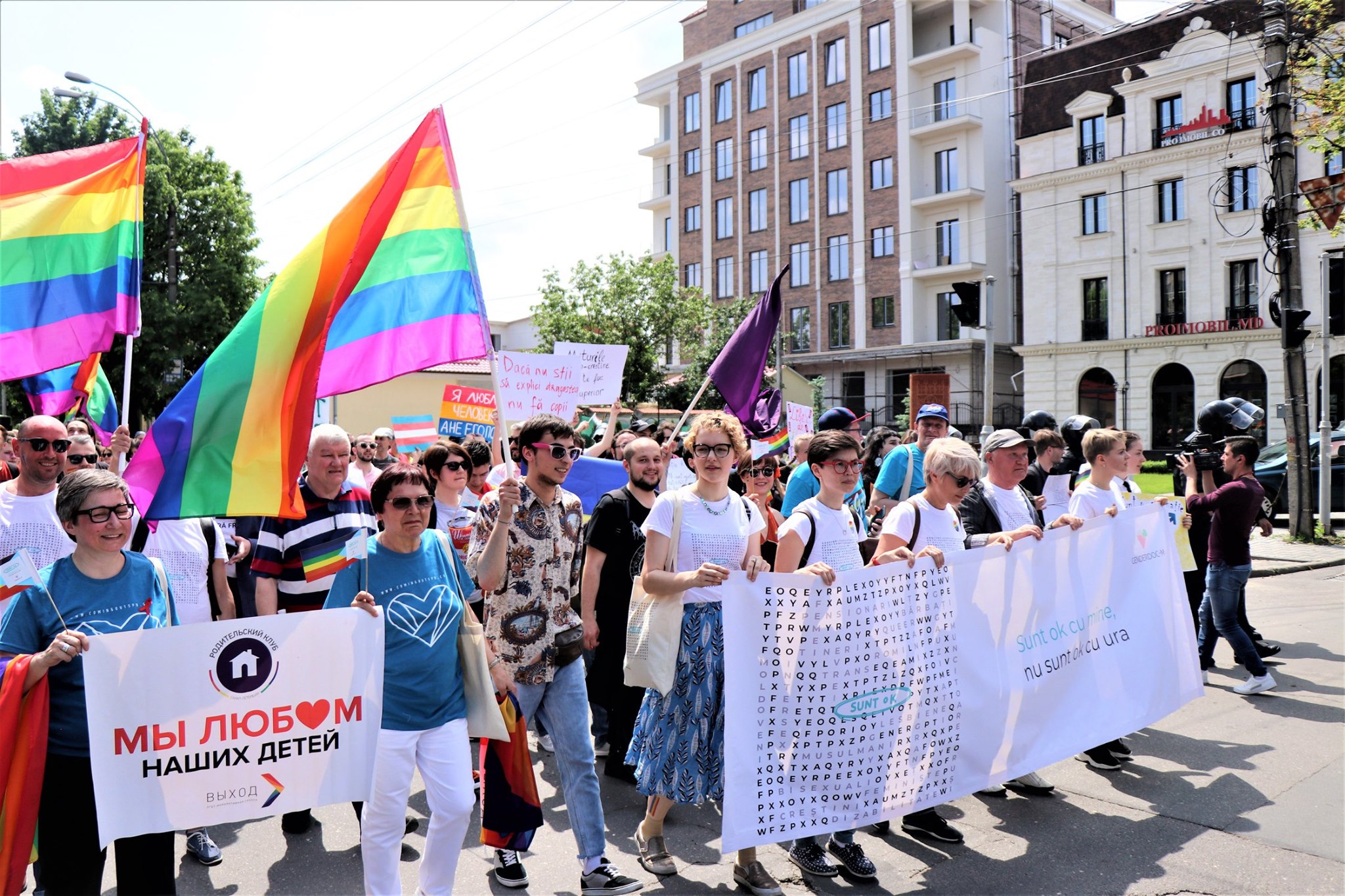 20 euro fine for a hate crime

In Moldova, a draft law has been before parliament for seven years to specify what hate crimes are and how they should be punished, says Doina Ioana Straisteanu, a lawyer and human rights activist in Chisinau. By her own account, she is the only lawyer in Moldova who advocates for LGBT rights in the country. However, the political leadership does not see this as a priority at the moment. At the same time, annual reports by LGBT organization Genderdoc-M showed the number of hate crimes. “The knowledge that hate-crimes as such are not punishable leads to more and more of such attacks against marginalized groups – including LGBT people,” Straisteanu said. For the lawyer, however, it is clear why there is precisely no prioritization of the issue on the part of politicians, she said. “We are in the middle of an election campaign.”

As an attorney who also represents LGBT people against hate crimes, she said, she uses what she has. “For example, I have the ability – even though hate crimes as such are not enshrined in the law – to ask for a sentence enhancement if it becomes clear that the crime was motivated solely by the sexual orientation of the person harmed.” It is possible to consider the aspect of hate in criminal prosecution, he said. However, he said, this only refers to the four components of ethnicity, social standing, nationality and religion. Sexual orientation does not apply.

There is also a paragraph criminalizing discrimination.

This was used by Straisteanu against the radical Russian anti-LGBT vigilante group Occupy Pedophilia, which is also based in Moldova’s major cities, he said. Using dating apps and the Internet, he said, the group invited gay men on dates to attack and beat them up. In the city of Balti, a group of around 20 young men had attacked their client, filmed the acts and then published them on the Internet. It had been possible to identify all those involved based on this footage, but there had still been no convictions because, with a few exceptions, all the attackers had been under the age of 16. The few aged 17 were sentenced to several years’ imprisonment on probation.

Although there were proven ten cases of hate crimes against LGBT people in Moldova, this was the only case that resulted in a conviction, Straisteanu said. This was in 2016/17, he said. In all other cases, he said, a criminal investigation was denied. Straisteanu would have referred these cases to the European Court of Human Rights.

Further, there had been a case in Balti in which a man was hit in the face on the street by an unknown man. The basis for this, the lawyer said, was that the victim had been seen on the Internet, with the comment that he was gay. In fact, she said, the victim was gay but had not been out at the time. The attacker was sentenced to a fine of 20 euros.

Politicians use prejudice to manipulate

“The social situation in Moldova is very difficult,” says Danilova, “because there is a lot of prejudice against LGBT people within society, which is very often used by politicians to manipulate public opinion.” Attorney Doina Ioana Straisteanu confirms this as well. “Public opinion clearly shows that people think LGBT people are bad. For example, no one wants to live next to them and they do not accept gay or lesbian family members. This hatred is systematically instilled in people by political parties.” That’s why Genderdoc-M also offers a legal hotline where LGBT people can discuss hate crimes or threats and possible consequences with Doina Ioana Straisteanu, she said. There is also no special training for medical students or police officers on important LGBT issues. Genderdoc-M is the only organization in Moldova that provides information on LGBT issues. Surveys among the population in 2008 and 2016 showed that 85 and 78 percent, respectively, completely rejected homosexuality as such. However, he said, another study showed that one-third of the population believes LGBT people should not exist. “We are very pleased with this figure,” Danilova says, “because compared to previous years, this is an improvement. We also believe that in ten years it will look very different.” This is also due, the activist says, to the fact that Moldova’s society is very conservative and traditional, which is often used by politicians. “We try to bring Western values to Moldova, but they are contrary to our traditional family values.” 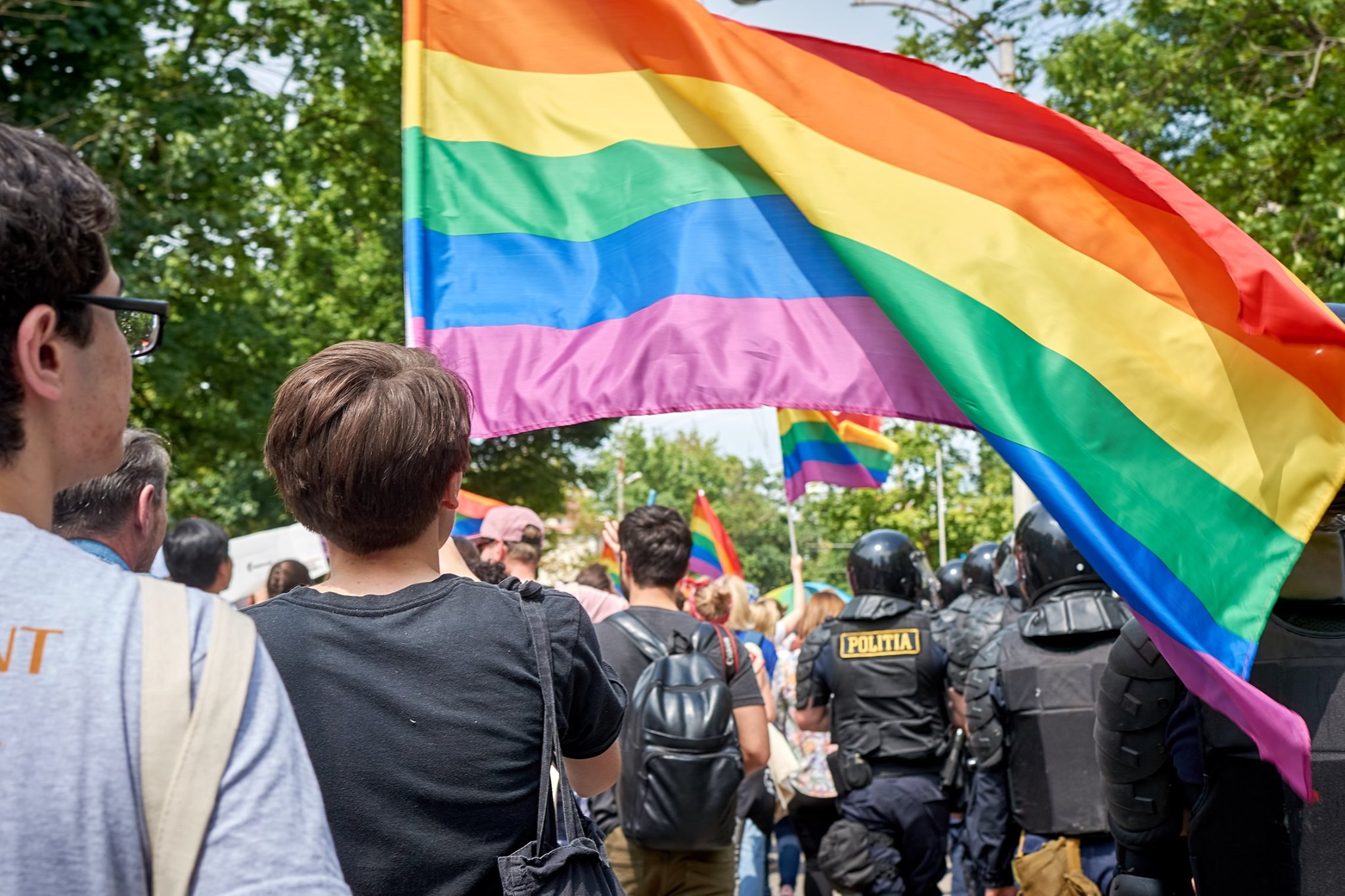 “Hate speech against LGBT people is increasing, especially in the period before elections,” Danilova says. In 2018, she says, LGBT people were the group against which most hate comments were made. In 2020, however, it was women in general. In the current election, she says, the Socialist Party announced it would criminalize any public information about homosexuality as propaganda. Further, the party wants to tighten also the constitution Moldova’s, with the formulation that only a male person can be a father and only a female person a mother. Likewise, it is to be taken up explicitly that a marriage between two persons of the same sex is forbidden.

Furthermore, the church is very involved in local politics, he said. “It even happens that they publicly call for the election of homophobic candidates,” Danilova said.

“Sex education is generally non-existent in many schools in Moldova,” Danilo says, “and information on diversity even more so.” He says there have been attempts to add sex education to the curriculum – even without LGBT references – but this has been impossible to push through in the face of opposition from the church and parents. Genderdoc-M is also working on a program against bullying schools, though this is not exclusively for LGBT either, the activist says. However, she says, implementation has only been possible for teenagers in the 14-plus age group at secondary schools. At Genderdoc-M, there is a support group for LGBT teens, but this is also an exception because the psychologist in charge has a license for this age group. In general, however, it is not possible to address any LGBT topic in schools because of the Ministry of Education.

There are exceptions, however. For example, Alexandra Iorga, a student from Chisinau, says: “I am very glad that there were special events at my school on tolerance education towards LGBT people. Because my school only goes from 10th to 12th grade, and that’s why we were able to organize everything ourselves, without the ministry or parents saying anything.” She also said she met a lot of LGBT teens this year in particular. “I don’t think there has been a generation before where more teens were outed. That’s why it’s so important to have events like this, and I wish we could get the ministry to include the LGBT issue in school education.” This is also confirmed by Anastasiia Danilova: “I am very impressed how brave the LGBT teens in Moldova are. They organize actions themselves in their schools. That’s great.” 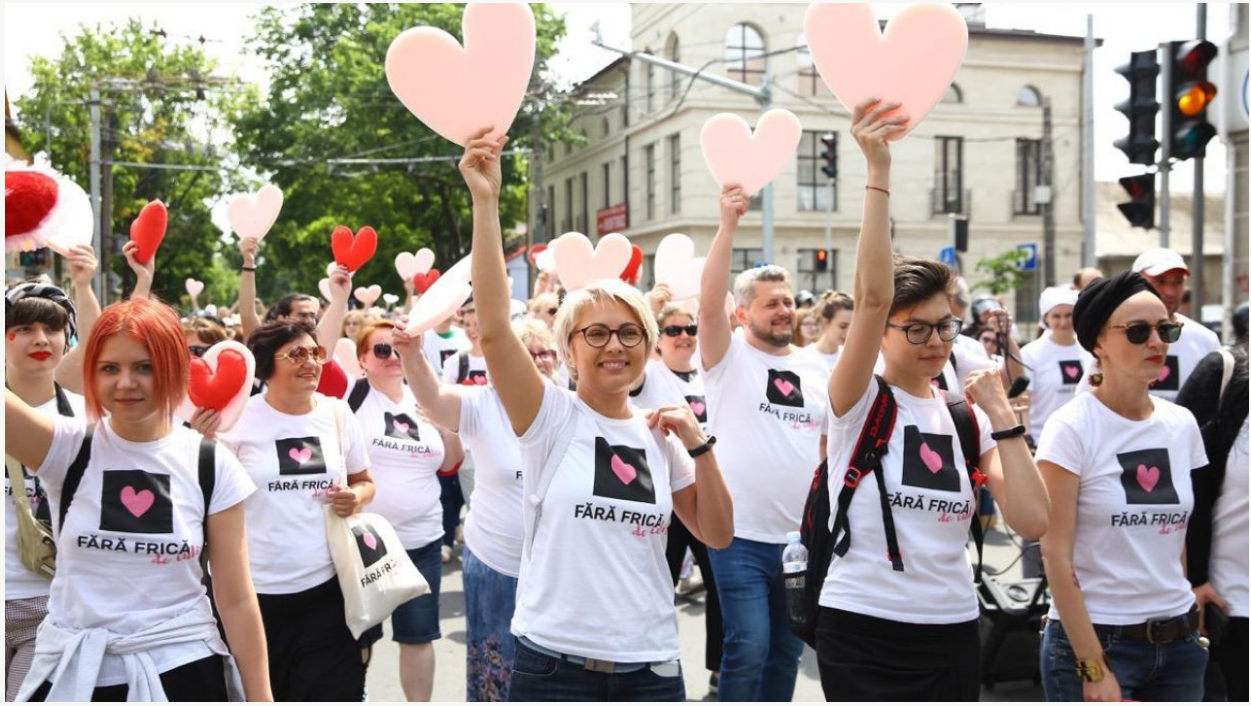 So, as in many countries, there is hope in Moldova that successor generations will prove more tolerant and liberal – to which social media and pop culture will certainly contribute their share.