Portrait(s) of Queer Ukraine – part two: Escaping from Abuse and Coming Out after War 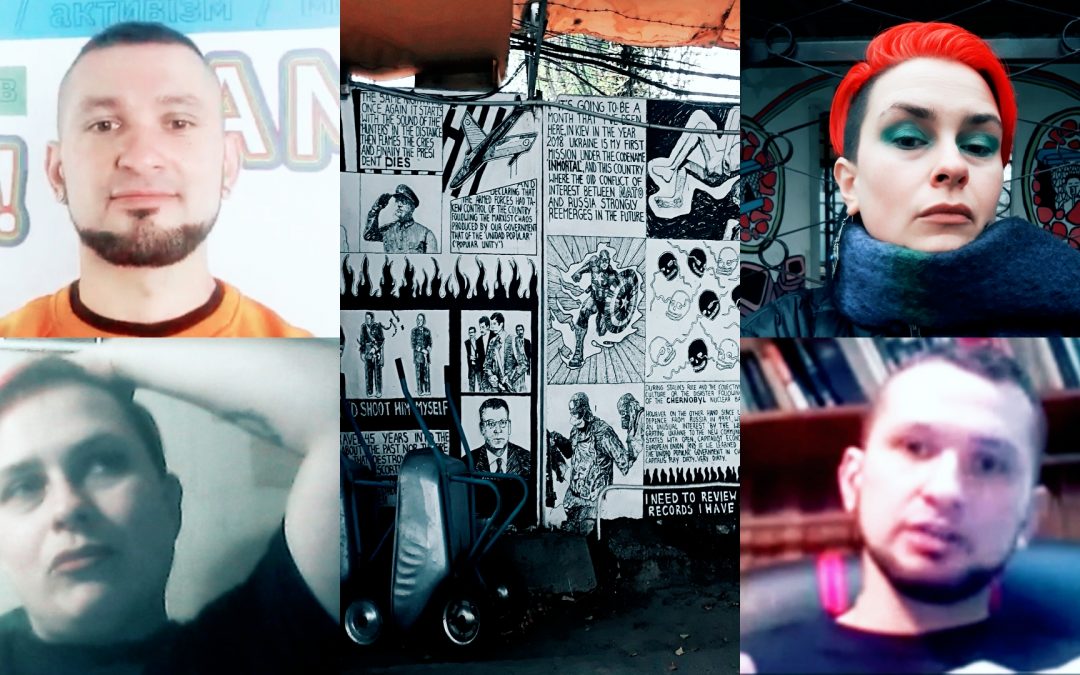 Fled from abuse and binarity to Kyiv: Edward Reese 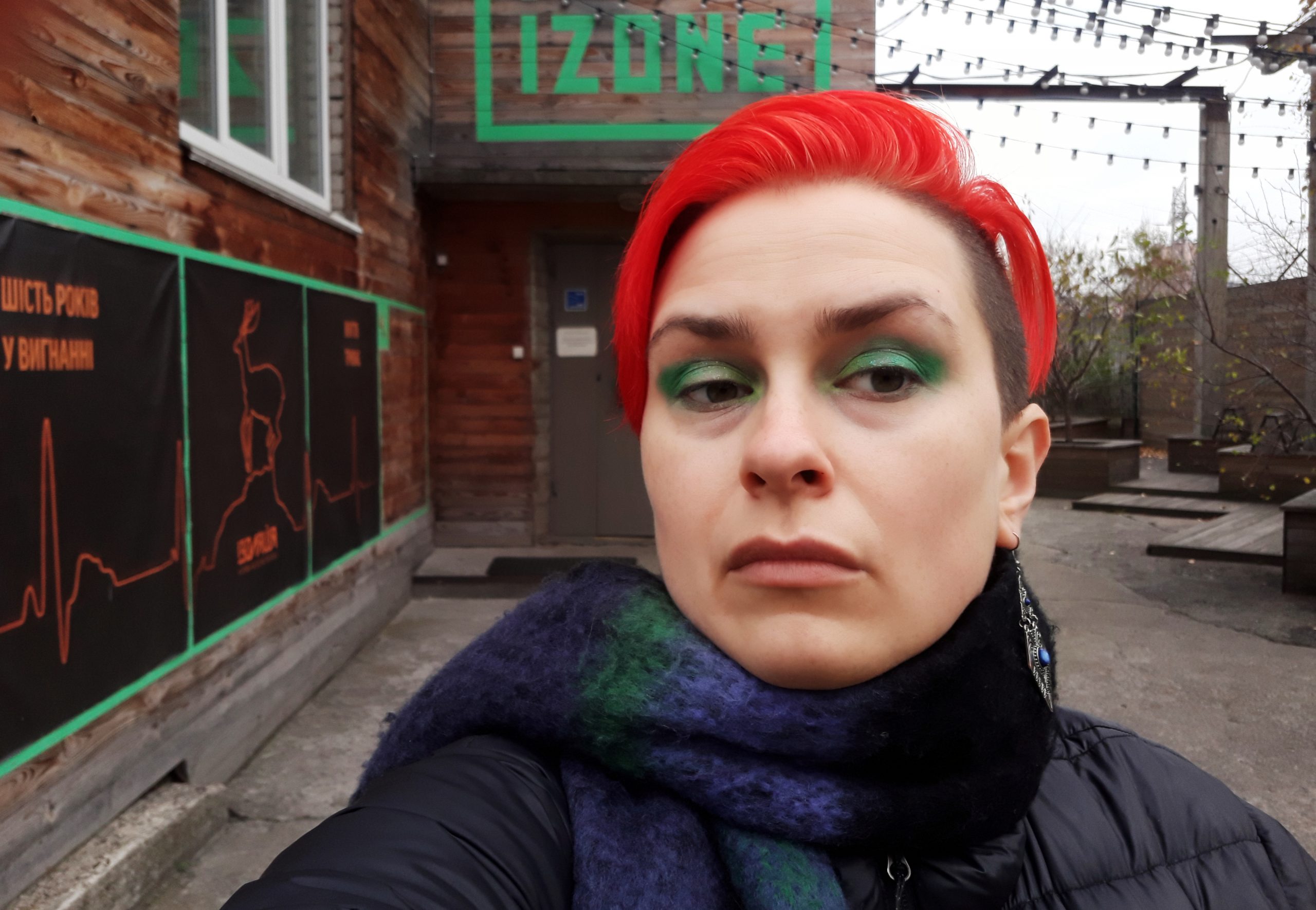 Edward Reese in front of the event location Izone in Kyiv, where he came out publicly as a queer person, activist and victim of domestic abuse. Credit: private

Now, at 35, living and working in Kyiv, I feel free. In spring 2019 I participated in the Docudays UA as a Living book. In Izone I came out in public – as a queer person, as an activist and as a survivor of domestic abuse in a queer relationship. That was very empowering for me.

At 18 I wrote in my diary: “At times I feel like a princess, then like a war veteran. It would be so much easier if I was a normal woman.”A standard description of a non-binary person: lost in-between. I spoke about it with my former partner, back then in Dnipro. He was the first person who talked about himself as a He being a woman. We explored it together. He helped me to understand myself, my identity. I am grateful for that. But it was an abusive relationship.

Abusive relationships in queer couples, especially in Ukraine, face specific issues. First, queer people are often hiding. The abuser can threaten and blackmail you easily. Second, people are afraid that they would never find a new partner. When I was young we were the only gay couple we knew. Third, the police and officials don’t take queer couples seriously. They can mock even a person with bruises or other traces of violence. I never went there, although I was beaten many times. No one ever asked – neither parents nor colleagues. They didn’t want to go into it.

After 13 years in an abusive relationship I found myself in a state of depression and bulimia. But on a trip to Kyiv, where my partner joined an LGBT training, I stayed alone for the first time in five years! I saw a world where I can do and wear what I want, and go where I want. And I decided to leave him one night.  When I then arrived in Kyiv in spring 2019 the first weeks were the hardest: abusive relationships are like drug addiction – with withdrawal symptoms: pain, hysterics, wishes to return. But I learned: love is a feeling of acceptance, freedom and calmness.

In January I wanted to start my transition. But because of Corona it has been postponed. The first and last steps will be with a family doctor, there are up to ten friendly ones in Ukraine. Many people start their transition themselves. But visible people like me should follow the legal procedure. We can set an example. I want our health care system to become more modern.

Coming out after War: Viktor Pylypenko 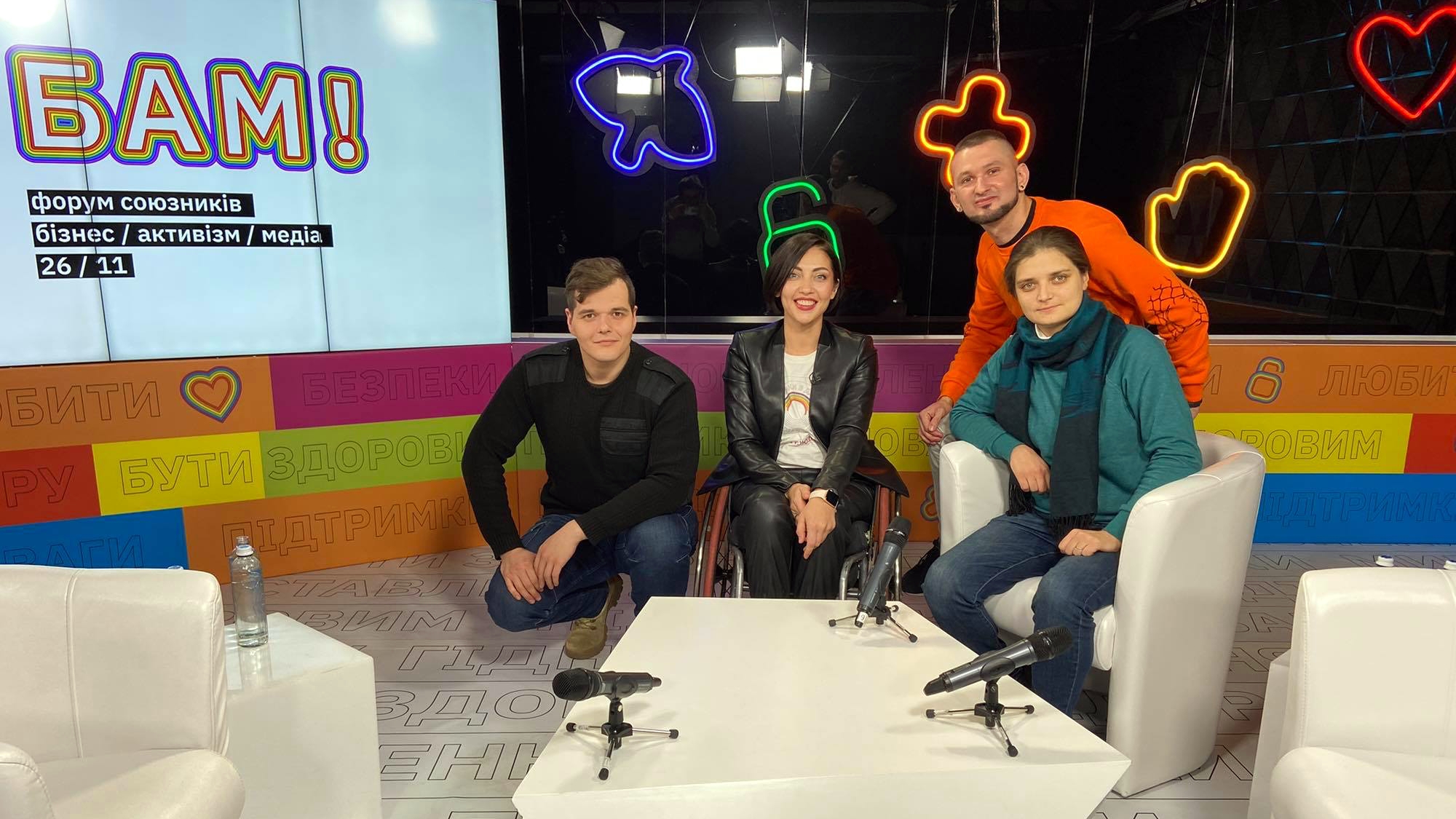 Viktor Pylypenko (standing) with the participants of the BAM! round table Oleksandr Galkin (l.) and Mariya Berlinska (r.) as well as host Ulyana Pcholkina. Credit: Private

I work for Tochka Opory (NGO Fulcrum), actually in my home office. I live in a picturesque suburb of Kyiv. For appointments I take the train to the city: recently I helped to organize a round table for supporters of equality from the Ukrainian military at the forum BAM! (Business, Activism and Media). That was a premiere for Ukraine!

I was born in Rivne and grew up in a military family. Later we moved to Kyiv. When I was young I suffered of inner homophobia and even told homophobic jokes to hide myself. At the age of 21 I really fell in love with a friend. Once we were drinking together, and I confessed my love to him. We also had sex, but the next morning he felt ashamed. To my parents I came out only as an adult. I put that off until the last moment. It felt uncomfortable to express my emotions to them.

Before I joined the army in 2014, I had worked in Dubai and lived there with a man from Russia. When the Maidan began, I hoped that the revolution would soon come off well. Then we could have lived together in Ukraine, I planned to visit him in Moscow. But then the war began and I waited for a convocation. After the annexation of Crimea I joined a volunteer battalion. My boyfriend even sponsored a night vision device. We messaged each other every day. But the distance and the war destroyed our relationship. I got a post-traumatic disorder, comrades had died in my arms. I was at the front for 20 months. I completely hid that I was gay. Many queer soldiers make up stories to hide it.

In 2018 I took part in the photo project “We were here” by Anton Shebetko: my public coming-out. My comrades usually supported me. But on Memorial Day in August 2019 a religious fanatic and former comrade attacked me. Now with our LGBT group, we explain: If we ourselves deny rights to individual groups, we are no better than the occupiers of the Putin regime.

I feel now like the freest man in Ukraine. I do not have to lead a double life. But we will have totally equal rights when Prides no longer have to be accompanied by the police. However, the radical right-wing groups that repeatedly attack LGBT enjoy little support among the population. But corrupt people support these structures which fight civil society organizations. They often take in former soldiers and celebrate them as veterans. But who has really fought won’t go into street fights. After all you go through at the front, you can only hate war.

Read more: Portrait(s) of Queer Ukraine – part one: Gay Love in Kyiv and Trans*Activism in Kharkiv