„Budmo gay! Dialogues about Dignity“: How patriotism and queer activism are connected in contemporary Ukraine 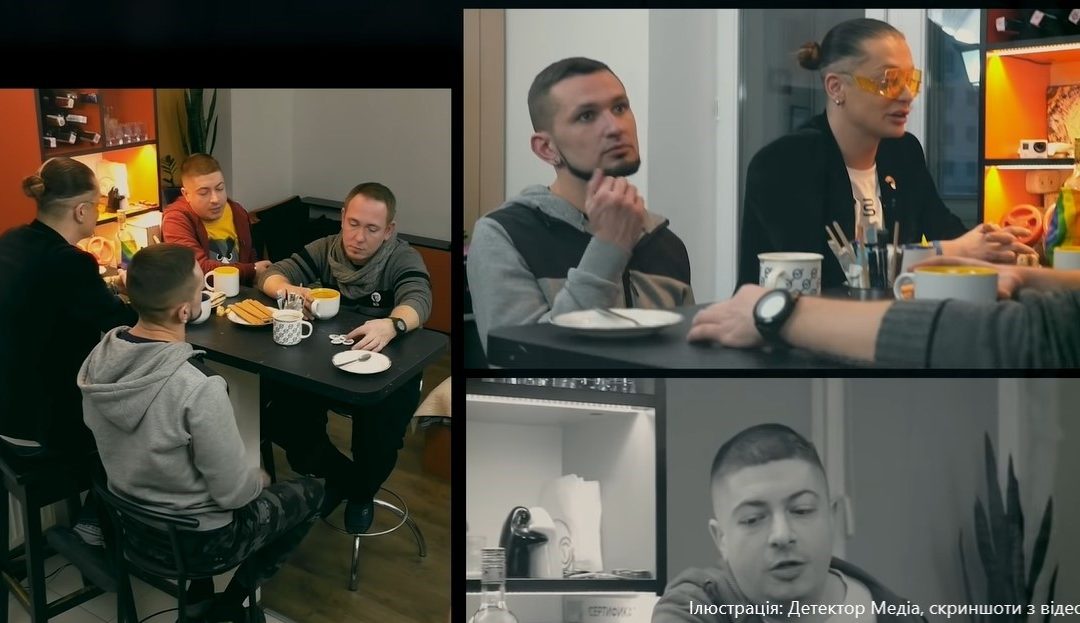 When in May 2021 the documentary „Budmo gay! Dialogues about Dignity“ premiered publicly in Kyiv, an aggressive and far right group attacked the event. Obviously triggered by the fact, that LGBTQ activism in contemporary Ukraine is — proudly! — connected to patriotism.

As a consequence of the „Revolution of Dignity“, the mass protests on the Euromaidan and the subsequent upheavals, the self-image of the LGBTQ community in Ukraine has changed. Although during the demonstrations in winter 2013/14 people decided against displaying the rainbow flag on the streets of Kyiv, instead protesting like the majority with Ukrainian flags for a new, European-oriented state, for many queer people this new patriotism has mixed with the longing for a tolerant and open society.

The movie “Budmo, gay! Dialogues about Dignity” (2021) by Yevhen Lesnoy shows how the revolution strengthened the self-confidence of queer people, how some of them not only supported the protests and later the Ukrainian army in the armed conflict against Russian troops in eastern regions of Ukraine, Donetsk and Luhansk Oblasts, but also fight for equality and visibility of their personal lifestyles. The military, through its hierarchical structures, has traditionally been an area of society where LGBTQ people have found it particularly difficult to be taken seriously. According to the protagonists in the film, many leaders in the Ukrainian army probably thought, that there would be no queers at all within the soldiers and volunteers.

But thanks to a photo project in 2018 more and more soldiers are coming out as gay, lesbian, bisexual or trans and form their own groups and initiatives. “Budmo, gay!” lets four of these people tell their stories. Through the diversity of four certain narratives the director creates a multi-layered picture of politics, military and human rights as well as patriotism, nationalism and queer activism. In the context of Ukraine’s recent history, these movements coincide. Their nodal point is their own, raised and hopefully recognized, voice.

Maksim Mishkin, LGBTQ activist and chairman of the club Wedmedi Ukrainy (Bears of Ukraine), Victor Pylypenko, veteran of the Russian-Ukrainian war and founder of the movement Ukrainian LGBT Soldiers and our Allies, Oleksandr Danilin aka drag queen Marlen Shcandal, openly gay and LGBT activist, and Mikola Buderatskiy as an openly gay military volunteer tell their biographical stories and experiences in the calm, cozy and secure atmosphere of a private flat. Their personal views are combined with opinions by additional experts from media and politics.

In one chapter the four define what dignity means to them. Pylypenko says: “Dignity is what we fought for on the Maidan and at the frontline. For Ukraine it means freedom for people, freedom for the country, where these people live, freedom of choice and respect.“ Mishkin: “Respect for oneself. When I stopped being ashamed of myself (…), when I stopped being silent.“ Danilin: “Dignity is not being afraid to present oneself.“ It becomes clear: Dignity includes one’s own voice in public within their common struggle for freedom, participation and self-determination. And the queer community in Ukraine learned from the events since the Maidan protests, that individuals can unite and achieve something.

So one leading narrative for the development of Ukraine’s civil society and queer activism emerges from individual stories of the protagonists, building up a common voice of patriotic queers in Ukraine. The documentary “Budmo, gay!” supports this voice and gives it a platform in the public sphere as a relevant perspective on the political development in Ukraine. Unfortunately, not without problems.

“Budmo, gay” was shown for the first time on 27 May 2021 in the small LGBT event space „Dialog Hub“ in Kyiv. The protagonists and filmmakers as well as experts, friends and members of organizations were present. That the film, focusing on voices, statements, assessments and perspectives, is obviously relevant was then even proven by an incident at the premiere: several people dressed in black, presumably right-wing radicals, surrounded the room, kicked in doors and windows and threw smoke bangers inside. In the end, some of the present people suffered mild smoke inhalation. During the following month activists and queer soldiers were repeatedly attacked especially virtually.

This reveals the social and political weight of films like „Budmo, gay“, which empowers previously silent voices to communicate in public. This is also politics, politics as an active change of pseudo-fixed norms of who is allowed to speak and when exactly to say what.

Queer Cinema in Ukraine: From the Margins to the Center

LGBT Military: “There is something changing in people’s minds”

Writing, photographing and translating journalist, based in Frankfurt (Oder, Germany/Poland), focussing on topics around women, migration, society, civil and queer society and culture.